"Under the Hood, Part 3: Overnight Deliveries": At the Hanover Tower, Black Mask talks to Mister Freeze and explains him that he is not exactly working for him, but instead they are partners in crime. Freeze's c

"Under the Hood, Part 3: Overnight Deliveries"

Part of the "Batman: Under the Hood" storyline.

Under the Hood, Part 3: Overnight Deliveries

Professor Ivo created Amazo with a human model in mind! His functionality mimics that of a human being! His weaknesses are located at the same points!

Synopsis for "Under the Hood, Part 3: Overnight Deliveries"

At the Hanover Tower, Black Mask talks to Mister Freeze and explains him that he is not exactly working for him, but instead they are partners in crime. Freeze's cold attitude is reproached by one of Black Mask's thugs and he is instantly killed by Freeze. Black Mask then starts telling Freeze about and important shipment that was supposed to arrive soon and he needs Freeze to make sure that the shipment comes to him. However, David Li informs Black Mask that one of the shipments should have arrived by now and that it seems that there is trouble since their men haven't contacted him yet. Black Mask tells Freeze that there is one special package in that shipment that he wants as it contains the most powerful weapon he could desire – which is soon revealed to be a large crate of Kryptonite. 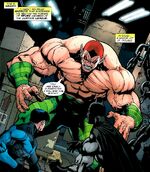 Batman and Nightwing vs. Amazo

At that moment, Batman and Nightwing are fighting Amazo, despite being in an evident handicap. Batman uses some flash grenades to distract Amazo and then he uses an explosive Batarang to weaken one of Amazo's legs, preventing him from using Flash's super speed. Batman and Nightwing run out of the warehouse and try to get as far away as possible, but Amazo's strength and speed allows him to catch Nightwing as he goes flying away. Batman uses the Batrope to lash it to Amazo's injured leg and he is dragged by the flying android, who was Nightwing on his grip. Batman tells Nightwing that Amazo has the same weak points as a human being and Nightwing uses a couple of batarangs to stab Amazo inside the ears, causing the android to loose the grip on Nightwing and fall down to the pavement. Batman and Nightwing jump to a fire escape ladder, thinking that they have a break from the fight, but instead, Amazo grabs the ladder and pulls it out of the building. Batman and Nightwing reach the ground and start fighting Amazo. Nightwing dodges a well aimed heat vision while creating a distraction. Amazo keeps trying to fry Nightwing with the heat vision without success, until Batman places some putty on Amazo's eyes. Amazo tells Batman that it won't stop his heat vision and as he tries to burn the putty and it explodes, damaging his eyesight. Batman tells that it was plastique and with the damage done to the android, the duo are able to fight him in an almost fair fight. Batman plays his last card by remotely calling the Batmobile using the Utility Belt commands and when the vehicle arrives, Batman and Nightwing clear the path and allow the Batmobile to shoot a missile that hits Amazo and sends him flying into the waters of Gotham Harbor. A big explosion inside the water takes place and Nightwing wonders if Amazo survived the attack, but Batman tells him that if he did, he'd be swimming towards them with Aquaman's abilities. Batman and Nightwing get in the Batboat and start searching for the remains of the android in the deep waters. Nightwing wonders if Batman knows who is behind the illegal shippings and Amazo, but the dark knight doesn't really care at the moment. 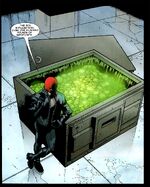 Red Hood and the stolen Kryptonite

A few moments later, Black Mask talks to someone on the phone and hears about the activation and destruction of Amazo at the hands of Batman. He demands an explanation from the person on the other side and David Sutabi comes to him with a call from Red Hood. Black Mask asks if Red Hood was the responsible for the explosion that destroyed his shipment and Red Hood admits that it was him and that he also activated Amazo. Black Mask then asks Red Hood for the last missing package and Red Hood tells him that indeed he took that as well. Red Hood is impressed with the box with more than one hundred pounds of Kryptonite and Black Mask tells him that he is really wants it back.


Appearing in "Under the Hood, Part 3: Overnight Deliveries"

Retrieved from "https://dc.fandom.com/wiki/Batman_Vol_1_637?oldid=2153161"
Community content is available under CC-BY-SA unless otherwise noted.