"Family Reunion, Part 1: The Word on the Street": A couple of thugs are transporting some special cargo across Gotham City and one of them is concerned about the possibilities of being attacked by Red Hood. As soon as he expresses his fear, the van they are driving

"Family Reunion, Part 1: The Word on the Street"

Family Reunion, Part 1: The Word on the Street

Can the Lazarus Pit raise the dead?


Appearing in "Family Reunion, Part 1: The Word on the Street"

Synopsis for "Family Reunion, Part 1: The Word on the Street"

A couple of thugs are transporting some special cargo across Gotham City and one of them is concerned about the possibilities of being attacked by Red Hood. As soon as he expresses his fear, the van they are driving is blown in a big explosion and the whole scene is witnessed by Red Hood from the distance, while he holds a remote detonator on his hand.

David Li tells Black Mask about the recent incident and they recall that Red Hood has been targetting Black Mask's operations starting with the drug dealing racket and then stealing the Kryptonite. Now, Red Hood has started to destroy their goods and Black Mask starts to realize that Red Hood is a big threat to him, but he expects that someone else gets rid of Red Hood.

Elsewhere, Batman has taken Zatanna to the location of one of Ra's al Ghul's Lazarus Pit and he questions her about her knowledge on the subject of Lazarus Pits being capable of raising the dead. However, Zatanna doesn't have a definitive answer and Batman decides to look for someone with more experience on raising the dead.

Batman goes to Jason Blood, the human alter-ego of the demon Etrigan and ask him about the ways of bringing back the dead. Blood explains that the most common way to do that is to bring the people as zombies and that any other way of doing it requires practice, knowledge and access to the dead person during the first moments after passing away. Blood gives Batman the example of Green Arrow, who was dead but eventually returned to life.

Back in Gotham, a drug exchange is taking place on an abandoned warehouse and Onyx arrives at the place, takes out most of the thugs and asks the leader who are they all working for. The thug refuses to answer but after Onyx inflicts pain to him, he tells her that they are working for Red Hood.

Batman goes to Star City and meets with Green Arrow to ask him about the time when he came back from death. Green Arrow tells Batman exactly what he already knows and that there is no mystery around his death and revival. However, Green Arrow's tone is a bit harsh and Batman knows that Green Arrow is holding a grudge against him because of something he did to Batman. As Batman leaves the place, Green Arrow looks at him and silently speaks the words "I'm sorry". 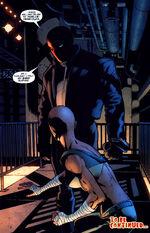 Batman is on his way back to Gotham on the Batplane when the emergency line starts ringing and after answering it, Onyx speaks to Batman and tries to tell him about the new criminal in Gotham, but Batman is already aware of Red Hood's presence and he tells Onyx to only use the emergency line when she has a location or if there is an actual emergency. Onyx feels rejected and soon she starts spying on a meeting of drug dealers. She learns then that most of them don't want to stick with Black Mask because he takes too much from their money, but they also don't want to stick with Red Hood because he is known to have brutal methods against his own men. As Onyx listens the conversation, someone talks behind her and when she turns around she sees Red Hood too close to her. He explains that some of the drug dealers had to be killed because they were selling drugs to kids and then he introduces himself.

Retrieved from "https://dc.fandom.com/wiki/Batman_Vol_1_639?oldid=2697876"
Community content is available under CC-BY-SA unless otherwise noted.