"Family Reunion, Conclusion: Face to Face": Batman is piloting the Batplane towards Gotham City remembering the horrible past of his allies like Barbara Gordon, Stephanie Brown and Jason Todd. After searching for Onyx's radio signal

Part of the "Batman: Under the Hood" storyline.

Batman is piloting the Batplane towards Gotham City remembering the horrible past of his allies like Barbara Gordon, Stephanie Brown and Jason Todd. After searching for Onyx's radio signal without success, Batman contacts Alfred and asks him to locate Onyx as soon as possible.

Meanwhile, Onyx is being attacked by Red Hood, who stabbed her in the shoulder and gave her a bad injury. Red Hood explains that he can kill her with a single move or he can take the dagger from her shoulder and allow her to run away. He mentions a third option which gives Onyx the chance to join him in his battle, but he was just teasing her. Red Hood removes the dagger from her shoulder and gives Onyx a special garment that stops the bleeding. Then he tries to get Onyx to attack him, but instead, Batman arrives at the scene and confronts Red Hood.

Red Hood starts shooting at Batman, but the dark knight moves fast to the back of a trash container and places a couple of propulsors to make the container move against Red Hood. Red Hood jumps to dodge the container and Batman uses his Batrope to bring him down to the ground. Red Hood cuts the rope with his blade and he uses an electric clipper in the batrope, giving Batman a small jolt of electricity. Batman's gauntlet is burned and he uses some small grenades againts Red Hood, who is pushed by the explosion towards the fire escape ladder of a building. 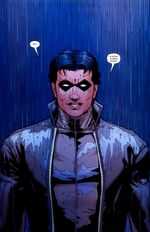 Jason Todd, back from the dead

Red Hood climbs the building to the rooftop and soon Batman catches up with him. They start fighting again and the rain starts pouring on them. Each of them give the best they have and soon they fall down to the street level. Red Hood manages to remove the cowl from Batman, revealing Bruce Wayne under the mask. Red Hood decides to keep it even and he takes off his helmet, revealing his true identity as Jason Todd. Bruce can't believe his eyes and Jason picks up a Batarang from the ground, cuts himself and gives it to Bruce, so he can examine it for fingerprints and DNA to prove that he is the real Jason Todd. Bruce wants to know why is Jason doing all the past deeds and Jason reveals that he has come to cleanse Gotham in the way that Bruce never did. Bruce replies that he will stop Jason no matter what and Jason uses a detonator that causes his Red Hood helmet to explode. Batman is pushed back by the explosion and when he recovers, Jason is gone.

Bruce returs to the Batcave and examines the evidence on the Batcomputer, learning that in fact everything indicates that Jason Todd is in fact Red Hood. Alfred is concerned for Bruce as he walks through the Batcave and stares at Jason's Robin suit inside the display case. Alfred asks if Bruce wants that piece of memorabilia removed from the Batcave, but Bruce refuses and replies that the recent events don't change anything at all.

Retrieved from "https://dc.fandom.com/wiki/Batman_Vol_1_641?oldid=2153165"
Community content is available under CC-BY-SA unless otherwise noted.