"War Crimes, Part 2: Minor Discrepancies": Aaron Black was apparently attacked by Batman when Joker appeared and challenged Batman. They start fighting and beating each other until the real Batman appears and trie

The beatings stop when you start talking.

Aaron Black was apparently attacked by Batman when Joker appeared and challenged Batman. They start fighting and beating each other until the real Batman appears and tries to stop them both from killing each other. Batman attacks the Joker first to eliminate the most dangerous person on the scene, but the impostor posing as Batman seizes the chance to run away. Batman knocks the Joker unconscious, he hesitates for a moment and then he decides what to do. Batman tells Aaron Black to get somewhere safe before the Joker recovers and then Batman starts chasing down the impostor.

Meanwhile, Arturo Rodriguez is having a conversation with Crystal Brown about her future appearance of his TV show, where she is going to tell the audience the story of her daughter, Stephanie and how she was killed during the gang war.

The fake Batman is Black Mask
The impostor Batman climbs to a rooftop and takes off the disguise, revealing to be Black Mask. He calls some of his men to pick him up at the place where he is, but he wasn't able to tell them where that place is because he lost track of the location during the chase in which he believes to have lost Batman. However, Batman jumps at him from behind at that same moment and they start fighting. Black Mask tries to stand his ground against the dark knight, but Batman is able to overpower the crime lord with ease. Before delivering the final blow, Batman tells Black Mask to remove that costume, but the criminal takes out a gas grenade and uses it against Batman, who tries to put on his gas mask, but in the meantime, Black Mask again manages to escape for good.

Bruce goes back to the Batcave and tries to solve the mystery of the disappearance of Leslie Thompkins and Stephanie Brown's medical records from the clinic, along with the death of Leslie's assistant. Alfred suggests that maybe he can find useful information using his unique detective skills and after a quick lunch break, provided by the butler, Bruce finds that the medical records about the medications administered the night of Stephanie's death, were altered and he deduces that someone let Stephanie die deliberately. Bruce's anger gets out of control and he starts training with his punching bag until it breaks.

Later, the manager of WBGK is waiting for Arturo Rodriguez to show up and when the man finally does, he demands an explanation for the lack of important interviews on the show. Rodriguez explains that Aaron Black has disappeared from his radar and that he just have Crystal Brown as a replacement. However, the manager shows Rodriguez that Aaron Black has not disappeared as he is giving an interview to Winona Chen, over channel 7. Black, who has taken over the alias of "The Reformer", tells that he was attacked by two Bat-men and that he believes that there might be many more of them prowling the city. He also states that he was offered protection from Rodriguez's station, but despite that, he was almost killed by Joker and the Bat-men. Lastly, Black questioned the various people that benefited from the gang war, such as Black Mask, Commissioner Akins and Rodriguez himself. 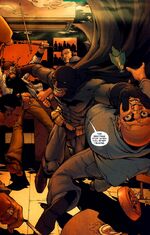 Batman looks for the truth
As a result of this, the media tries to get a statement from Commissioner Akins, who refuses to talk to any of the journalists.

That night, Batman goes to Carlo's night club, den for various sort of criminals and enters through the main door. As he does that, many miniature robots enter the place and locate on various key point of the place and start recording the audio inside the place. Batman tells the thugs that he is looking for Black Mask, Joker, Leslie Thompkins and Aaron Black and soon he starts beating all of the thugs in the place. However, a few minutes later, Batman leaves the place, allowing the thugs to think that they were victorious over him. Batman goes away on the Batmobile and calls Alfred to start recording the conversations of the thugs at the night club as the plan was to make them talk all they know about the situation.

Retrieved from "https://dc.fandom.com/wiki/Batman_Vol_1_643?oldid=2511523"
Community content is available under CC-BY-SA unless otherwise noted.