View source
watch 22:41
Batman Character Guide [INTERACTIVE]
Do you like this video?
Play Sound
"War Crimes, Part 4: Judgment At Gotham": Black Mask was attacked by Joker and the clown explains that the reason for his hatred towards Sionis is the fact that he was held res

I'd originally planned to claim it was a legitimate triage decision -- allocation of time and resources under emergency conditions. But we both know better, Bruce. Truth is I wanted to end it all -- all the secret warriors in hoods and capes. The endless violence. I could no longer be a party to such madness. Best to sacrifice one to caution others from putting on those stupid masks.

Black Mask was attacked by Joker and the clown explains that the reason for his hatred towards Sionis is the fact that he was held responsible for the death of Stephanie Brown, the only female Robin, taking the chance of killing her away from Joker. Joker prepares to deliver the final blow and points his gun at Black Mask, who in return kicks the weapon out of Joker's hands and the struggle continues. At that moment, Batman arrives at the alley where they are fighting and stops the fight. Joker and Black Mask try to escape but Batman manages to get a hold of them and restrains them long enough for the Gotham City Police Department to arrive on the scene. Batman drags Black Mask close to the police but Joker pulls out a couple of guns from his jacket and points them at Batman and Black Mask. Joker's guns seem to be only toy guns with darts as ammunition, but Joker shoots them and the darts stick to Batman's chest and Black Mask's forehead. As soon as they are in contact with the target, the darts start burning Black Mask's head and Batman's suit.

Joker explains that he coated the darts with acid and glue, so they can't be removed. Batman removes the upper part of the Batsuit and then he takes out a basic solution from his Utility Belt and neutralizes the acid that is hurting Black Mask's face. Joker is enraged at Batman, but the dark knight's wrath is far worse than Joker's and he knocks the criminal out with a single punch. Batman drags both criminals to the police and gets on his way. However, some of the officers try to arrest Batman, but he convinces them to leave him alone for their own good.

A few days later, Winona Chen and her partner give the news about the outcome of the trials concerning Joker and Black Mask. Joker's lawyers will most likely to use the insanity plea to send Joker back to Arkham, while Black Mask is going to be convicted for the murders of Stephanie Brown and Vera Cesares, but he manages to escape from police custody moments before the trial by killing two guards, three civilians and the judge. The Odessa Mob leader, Alexandra Kosov is convicted for consipracy to commit murder in the events of the Alamo High and the famous reporter Arturo Rodriguez is also indicted for conspiracy to commit murder. It is revealed on a videotape sent by an anonymous person, that during the moments in which Arturo was Black Mask's hostage at the Gotham Clock Tower, Arturo allied himself with Black Mask and started working with the crime lord, giving him access to all kinds of confidential information. Rodriguez was fired from his network and soon was arrested by the police, as he played an important part in the attempted murder of Crystal Brown on his own show.

Alfred Pennyworth and Bruce watch the news in the Batcave and Alfred is glad that all the events from the gang war are all in the past. However, Bruce had two more unfinished pieces of business to attend to and asks Alfred to prepare the Batplane for later that night, as he is going to travel out of the country for a few days in order to find Stephanie's true killer.

Batman's first stop is in Gotham City in Winona Chen's apartment. Winona is utterly scared when she enters her apartment and finds Batman standing in the darkness. Batman is there to fulfill his promise made to her after she helped him find Aaron Black. Batman gives Winona a folder with information about the arrangements he made for her. He tells her that one of the three big national networks is going to call her and offer her to host her own Sunday news show and during his first run, she would interview Superman himself. Winona is astonished by Batman's kindness and she feels like kissing the man, but soon, she realizes that Batman is gone.

Batman takes the Batplane and goes all the way to Africa, where he locates a mission camp. He tracks down Leslie Thompkins, who has returned to Africa to work as a volunteer for relief efforts. Batman watches as Leslie works harder than any other person in the camp and when she is finally alone in one of the tents, he approaches her. Leslie is grateful that he has found her at last and Bruce demands an explanation as to why she let Stephanie die. Leslie explains that she was desperate and wanted to finish the caped crusaders dream once and for all and she decided to do so by letting Stephanie Brown die. Leslie was so regretful of what she did, that she burned her medical licence and gave her fortune away. The only thing that she wants now is to end her torment and she asks Bruce to kill her for good. Bruce refuses, as his code of honor would never allow him to kill another person, unlike Leslie. Leslie tells him that she has set up a fund for Stephanie's daughter, but Bruce replies that no fortune can replace the presence of a kid's parents, as he remembers his own tragic past. Bruce decides to leave the place and gives Leslie one last word of advice: She must never try to contact him again, she won't return to America and she won't practice medicine ever again. If she breaks one of those rules, Bruce will hunt her down as she is now just another criminal on his large database of names. Batman allows Leslie to stay in Africa to deal with her own torment as he returns home. 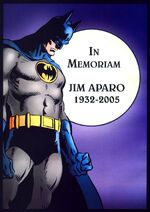