"Show Me Yesterday, For I Can't Find Today": At the Gotham Cemetery, Alfred Pennyworth recalls the past events involving Black Mask, Red Hood and Batman and their constant wa

"Show Me Yesterday, For I Can't Find Today"

Show Me Yesterday, For I Can't Find Today

Do you know then? How or when Jason's body was taken from the coffin?


Appearing in "Show Me Yesterday, For I Can't Find Today"

Synopsis for "Show Me Yesterday, For I Can't Find Today"

At the Gotham Cemetery, Alfred Pennyworth recalls the past events involving Black Mask, Red Hood and Batman and their constant war. However, Alfred is actually near Jason Todd's gravesite and he tells the private security guards hired by Bruce Wayne, that they are free to leave the place until he calls them back. As soon as the guards are gone, Alfred contacts Batman to let him examine the empty grave one more time in search for any clue that might hold an answer to Jason's resurrection. 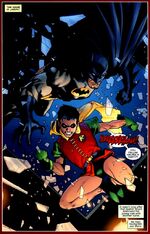 Alfred starts remembering the time when Bruce met Jason for the first time:
Batman returned to the Batmobile after a night of work and he dicovers that someone has taken the left front tire from the vehicle. Soon, a young kid approaches the car with an L wrench on his hand and Batman deduces that he is responsible for stealing the tire. Batman went home to the Batcave and told Alfred what happened, but instead of being angry, Batman was somehow pleased by the kid's feat.

Soon, Batman took the kid under his protection and made him the second Robin. They worked together against criminals like Captain Boomerang and always ended up victorious, thanks to Batman's expertise and Jason's determination.

A couple of days later on the Batcave, Bruce starts examining the coffin where Jason was buried several years ago. Alfred is concerned for Bruce's well-being as he spent ten hours at the gravesite and now he has not slept in eighty hours, obsessing over that single piece of evidence that might hold the answers to know what happened to Jason after his death. Bruce recalls the fact that the coffin that he is examining was made by the same person who made the coffins for his parents. However, the artist had help from his own son, who did a much better work that his father ever could. Alfred realizes the connotation of the story and he assures Bruce that no matter what happened to Jason, he has not surpassed Bruce in any way. Bruce takes a few seconds to think before starting over again to examine the coffin, while Alfred watches Jason's outfit on the Batcave and recalls more past events related to the youngster.

Time passed and Jason's determination became a threat to Batman's work as he would not only stop crime but hurt and cripple criminals without mercy. After working with Jason for a while, Batman began to realize that Jason was nothing like Dick Grayson and that Jason was in fact dangerous. After trying to reason with the kid, Batman felt at a loss as to how to proceed.

A few moments later, Bruce comes to the conclusion that he has been stupid and blind as he has examined the coffin thoroughly in order to find evidence of tampering or opening, but in doing so he overlooked the most important fact of all. Alfred wonders if Bruce already knows what happened to Jason's body, but Bruce replies that there was never a body in that coffin to begin with.

Retrieved from "https://dc.fandom.com/wiki/Batman_Vol_1_645?oldid=2511525"
Community content is available under CC-BY-SA unless otherwise noted.