"Batman & Son, Part 1: Building a Better Batmobile": Commissioner Gordon is thrown off a rooftop by the Joker and caught by the GCPD, laughing from Joker Venom all the way down. On

I did it! I finally killed Batman! In front of a bunch of vulnerable, disabled kids!!! Now get me Santa Claus!

Commissioner Gordon is thrown off a rooftop by the Joker and caught by the GCPD, laughing from Joker Venom all the way down. On the rooftop, Joker has caught someone he believes to be Batman and is beating him to death with a crowbar while disabled children tied to the Jokercopter watch. 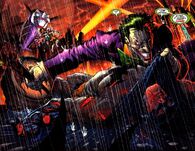 Joker believes he's caught Batman.
This man is revealed to be an impostor when he takes out a gun and shoots Joker in the face. The real Batman arrives in time to rescue the Joker and take the impostor into custody. He carries Joker to the ambulance through an alleyway covered in the graffiti phrase "Zur En Arrh," then throws Joker into a dumpster and leaves. In the hospital afterwards, Gordon recovers from the Joker toxin while they discuss the case. Gordon explains that the impostor was an ex-cop who snapped and put on a Batsuit, then congratulates Batman as Joker was the last major criminal he needed to put away. 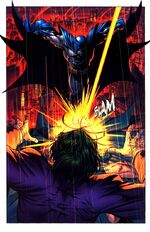 Bat-Cop shoots Joker.
Back at Wayne Manor, Bruce exercises, is served his dinner alone, and repairs the Batsuit in preparation for the next night. In the Batcave, he mentions to Alfred that Gordon said he should get out of the city more, and Alfred returns that Bruce is using his Batman growl in everyday speech. Robin arrives and explains that the city is dead, as rumors have spread that Batman finally had enough and shot Joker in the face. Bruce approves of the rumors, and Tim sees he is developing a new Batmobile but Bruce tells him not to peek. Robin leaves by motorcycle to spend some time on his own in the mountains, and reminds Bruce that the last time he took a vacation he returned energized enough to wipe out Gotham's super-crime in a month. Bruce agrees that he needs to loosen up as he is seeing super-villains everywhere. Elsewhere, Talia al Ghul and the League of Assassins threaten Kirk Langstrom. They kidnap his wife Francine and inject her with a degenerative neuro-bacillus that will cripple her in 24 hours unless he delivers them the Man-Bat Serum. Talia observes Bruce's plane by satellite with a small boy next to her, and says his past is catching up with him. 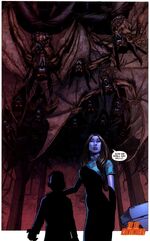 Ninja Man-Bats
Bruce travels to an Action for Africa fundraiser in London, where he meets with the nervous Langstrom who excuses himself and hands over the serum to the League.

Alfred coaches Bruce on his millionaire playboy persona, as his voice has become too gravelly and it's been too long since he's been on the gossip columns. He asks him when was the last time he really enjoyed being an international playboy, and mentions girlfriends of the past such as Julie Madison, Kathy Kane, Silver St. Cloud, and Vicki Vale. They practice tone and posture.

The gala is held in a museum exhibition displaying early comic book artwork. Bruce attends the gala fundraiser and enjoys flirting with socialites and starlets, although Alfred tells him to lose the growl and retreats to the car. Talia observes the party with her child, and the boy is able to recognize Bruce Wayne as his father. It's shown that they now have an army of Man-Bat Commandos, and Talia says they will now say hello. 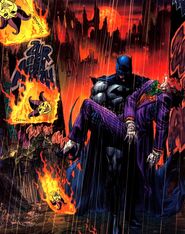 Zur-En-Arrh is seen in graffiti. 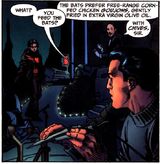 Retrieved from "https://dc.fandom.com/wiki/Batman_Vol_1_655?oldid=2511530"
Community content is available under CC-BY-SA unless otherwise noted.