"Batman R.I.P. - Zur En Arrh": Tim Drake sits in a shall shack reading through Batman's most outrageous past adventures (see below) as recorded in the Black Casebooks. As he does so Black Glove members [[Pierrot Lunaire (New Earth

The view from rock bottom. Bet you never knew it could be so pretty.

Tim Drake sits in a shall shack reading through Batman's most outrageous past adventures (see below) as recorded in the Black Casebooks. As he does so Black Glove members Pierrot Lunaire and Springheeled Jack sneak up on his position for an ambush, but Jack finds himself run down by Drake on his motorcycle before he can get through the door. Lunaire manages to leap onto the back of the motorcycle to garrote Drake, jumping back off at a low hanging branch and sending Jack in chase on his own motorcycle.

Elsewhere, a homeless man walks down an alley talking to himself about the "planet of little bat fairies." Down the alley, where he keeps his stuff, he finds a semi-conscious, amnesiac Bruce Wayne and tries to roust him before he realizes he knows him from somewhere. He introduces himself as Honor Jackson and lifts Wayne to his feet, causing him to have flashbacks to seizing and saying the Zur-En-Arrh trigger word, Dr. Hurt introducing himself, then injecting him with Crystal Meth and Heroin. Jackson decides that their meeting is "providence" since he is about to embark on a personal odyssey across town and Wayne appears to have "special forces" muscle.

In another part of the city, Nightwing is fighting off henchmen in Roman garb and making admittedly bad jokes the whole time. Robin contacts him from a restaurant and asks him to meet him at "checkpoint five" so they can discuss the boss, who he thinks was on to something big and may be in trouble. Springheeled Jack is watching from outside on his motorcycle, and Robin mentions needing to shake the Club of Villains before they can speak an contact is cut off with Black Glove member Scorpiana standing behind Nightwing.

In the city, Honor Jackson and Bruce Wayne beg for money. A couple of armed thugs attempt to rob them while they split the take, but Wayne fights them off with no problem, shocking even him. Walking through the part, Jackson tells Wayne he now only looks "half dead" calling that progress. He compares him to a "mystery man" on television who goes from town to town helping people who now needs help himself. From his recent haircut Wayne deduces that he hasn't been on the street long, noting that he has the accent of an educated man and starts to wonder how he lost his money and who he is. Honor gives him something to keep in his pockets--his former best friend, until he stood on it. He makes him promise to get it fixed so maybe one day it'll be his best friend too. The two of them arrive at their destination, a liquor store, and Honor says the odyssey talk was just motivation, then tells him to go see Lone-Eye Lincoln at eleven o'clock and make his decision with a clear head. His liquor bought, Honor and Wayne sit and look across the lake. Honor tells Wayne that he's never done anything he was proud of, but now he's saved one life, and is worth something after all. When Wayne turns to respond, he's disappeared. Wayne walks through the rain to see Lone-Eye Lincoln, telling him Honor sent him when he accuses him of being a cop. Lincoln tells him that honor is dead, having spent $100 just the day before on heroin and overdosed on it. Wayne is shocked, and it's only then that he realizes he's now in Crime Alley, and Lincoln offers to sell him heroin.

Robin arrives at checkpoint five and Nightwing isn't there, nor is he answering his comm.

In Arkham Asylum two doctors discuss the recently arrived patient, whom they believe is Pierre Lunaire. Because of his ferocity they were forced to dose him with Thorazine--and give him a beating--and as a souvenir of his "criminal mind" one of the doctors is keeping his mask, the mask of Nightwing, while Dick Grayson lay frothing at the mouth in a cell. 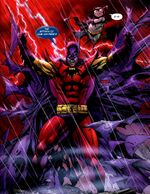 In the Batcave, Dr. Hurt joins his Black Glove allies in wearing a "flamboyant" costume by donning the bat themed masquerade costume of Thomas Wayne. Addressing his colleagues, he says the Batcave is the perfect base of operations to bring the city to it's knees and suggests that they mat bring Batman back "broken" "as [his] butler" when he's seen the error of his ways and he toasts to crime.

In the alley and using Honor Jackson's shopping cart Bruce Wayne sews while repeating the phrase Zur-En-Arrh. To himself he says "it would be easier to consider this all a dream" but in his hands he holds the Bat-Radia and, with a cobbled together and colourful Batsuit, declares himself the Batman of Zur En Arrh. As he does so Bat-Mite appears above his head.

Retrieved from "https://dc.fandom.com/wiki/Batman_Vol_1_678?oldid=2511546"
Community content is available under CC-BY-SA unless otherwise noted.