"Batman R.I.P.; The Conclusion - Hearts in Darkness": In a coffin, Batman wakes up in a straitjacket. As he wonders how he will get out, his mind flashes back to a conversation from over a year before...

In my attempts to see clearly in the deepest dark, in my efforts to go to the still eye in the storm of madness, did I open up myself to some pure source of evil? Did I finally reach the limits of reason? And find the Devil waiting? And was that fear in his eyes?


Appearing in "Batman R.I.P.; The Conclusion - Hearts in Darkness"

Synopsis for "Batman R.I.P.; The Conclusion - Hearts in Darkness"

In a coffin, Batman wakes up in a straitjacket. As he wonders how he will get out, his mind flashes back to a conversation from over a year before...

In the Tibetan monastery just after he emerged from the Thogal ritual, he is discussing it with a monk. He saw visions of his past and future, and became peripherally aware of the mental conditioning Doctor Hurt gave him years before. This gave him an idea: to create a secondary personality which would only become active in the event of a total psychological breakdown. The monk is impressed with the audacity of such a plan, but he has already poisoned Bruce Wayne's tea - compliments of his "Dark Master".

The monk describes the symptoms of the poison to Bruce Wayne: his mouth will go wet and his lips will go numb. The Dark Master will destroy everything he holds dear - but the monk's mouth seizes up as Bruce Wayne reveals that he swapped the cups.

Bruce describes how he inoculated himself against most poisons and always carries antidote. He revives the monk so he can deliver a message: as a result of the Thogal ritual, Batman is entirely without fear, doubt or any emotional weak spot. He will find the Dark Master; he will defeat him; and he will enjoy it.

The Black Glove gather at Batman's grave. After dinner, Batman's oxygen will run out and they will dig him up and use him as their brain-damaged butler. However, the Joker is waiting for them at their table, and wants to place a wager. When Doctor Hurt tries to prevent him, Joker kills the Generalissimo to take his place. The Joker states his bet: double or nothing, Batman will dig his way out of their death-trap and come after them. He explains that their plan was impressive, but the Joker has spent years trying to destroy Batman. All it has done is drive him insane. He gestures to the "Bat-Radia", a broken radio that Batman got from the "Honor Jackson" hallucination, which one member of the Black Glove decides to reassemble on a whim. When he does, he realises that the radio was rewired before he got there - now it sends signals; specifically, a signal which makes the Bat-Computer deactivate Arkham Asylum's security system. Vindicated, the Joker vows to "collect his winnings" from the millionaires and vanishes into the shadow.

In Gotham City, Pierrot Lunaire and the Swagman have finally cornered Robin. As they move in for the kill, they are stopped by the Club of Heroes. The tide is beginning to turn. 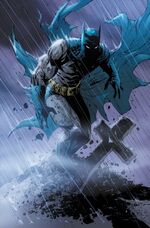 Batman rises from the grave
In Gotham, the lobotomization of Nightwing has been delayed for long enough. Le Bossu finally shows up, with some horrific facial wounds courtesy of the Joker. He decides to start the lobotomy there and then... but the drugs have worn off, and Nightwing fights his way out.

In his coffin, Batman notes the years he spent going over every possible angle, every weakness, every possible line of attack. Escape-artistry, yogic breath control, lockpicking, weight-training. He prepared... and today, that preparation pays off, as he escapes from a coffin trapped under 600lbs in loose dirt.

In Gotham, the Club of Heroes get the word that Batman is at Arkham Asylum. They stay to deal with the henchmen while Robin goes to save Batman.

At Arkham, Batman has made his way to the Black Glove. Jezebel Jet points out that, even if he overcomes the exhaustig trial he's been through and hands them over to the police, each individual member will simply buy their way out. Batman responds with some revelations: he knows that Jezebel was made into what she is by the events of a Black Glove wager some two decades before, which left her and her mother at the mercy of Joseph Nkele, her "father". The only thing that Jezebel values in the entire world is a tear-stained letter from her mother - which Batman stole from her safe and hid. Nightwing arrives to watch Batman's back, as Doctor Hurt runs away.

The Joker is attempting to make a getaway in an ambulance, but he is driven off the bridge by Damian piloting the Batmobile. 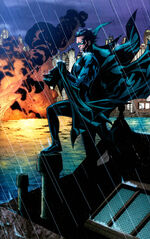 Nightwing holds Batman's cape and cowl
On the roof of Arkham Asylum, Batman catches up with Doctor Hurt, who reveals his trumpcard: he is secretly Thomas Wayne... but Batman has already made his guess - Mangrove Pierce, his father's body double and star of the Black Glove film John Mayhew made years before. Hurt avoids answering, but makes an offer: tomorrow, the Gotham media with publish a series of documents exposing Thomas & Martha Wayne as drug addict and perverts, unless Batman serves him. When Batman refuses, Hurt tries to leave in a helicopter, but Batman makes a jump and, through determination, crashes the helicopter into the river. His allies arrive too late, and the Mayor is already moving the Black Glove members off the crimescene before the police can arrive. Talia vows to take care of revenge.

On her private plane, Jezebel Jet vows revenge on Batman. She seems to have made a clean break, but her plane is swiftly brought down by a League of Assassins strikeforce, enhanced by the Man-Bat serum.

Six months later, Le Bossu has set up shop in Gotham and the last members of the Black Glove are dead. Bossu continues his crime spree until one day, when a bat-signal appears at his hideout...

Years ago, at Park Row, a couple with a young son emerge from Monarch Theater after a showing of "Mask of Zorro". The boy has clearly enjoyed the film, and wonders what it would be like if Zorro were to show up in Gotham. But as Joe Chill closes in on the couple, the father's last words are "The sad truth is, they'd probably throw someone like Zorro in Arkham."

Retrieved from "https://dc.fandom.com/wiki/Batman_Vol_1_681?oldid=2511548"
Community content is available under CC-BY-SA unless otherwise noted.