Batman and the Monster Men (Volume 1) 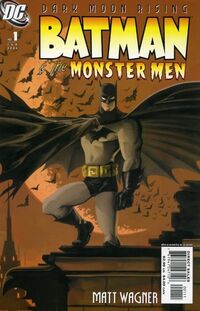 Batman and the Monster Men is a six-issue miniseries written and drawn by Matt Wagner, in 2005, as the first part of his Dark Moon Rising series. It takes place sometime after Batman: Year One and Batman: The Man Who Laughs. It focuses on Batman's first encounter with his notorious old foe, Hugo Strange.

Back to Comics Contents : Comics B : Batman and the Monster Men Vol 1

Retrieved from "https://dc.fandom.com/wiki/Batman_and_the_Monster_Men_Vol_1?oldid=1507155"
Community content is available under CC-BY-SA unless otherwise noted.