Batman and the Outsiders Vol 2 #11

You can tell your boss -- whenever the Hell you find him -- that the Penguin is no longer his partner in this endeavor... but once again his enemy. 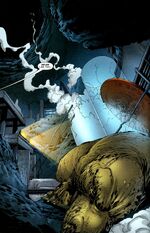 The Batcave is Destroyed

Superman flies as fast as he can towards Wayne Manor and he finds the front door slightly opened. When he steps inside, he sees an incoming attack and uses his heat vision to burn one of Green Arrow's arrows. Superman notices that Oliver is sitting in the middle of the living room, drinking Bruce Wayne's liquor. When Superman asks Oliver the reason he is in Wayne Manor, Green Arrow explains that he is doing the same as Superman; which is come to the realization that Bruce Wayne is gone for good. Superman doesn't think the same way and points out that maybe Bruce is taking a break, but Green Arrow stands up and walks Superman to the Batcave to show him the place completely destroyed and his hopes are crushed. Among the various trophies of the cave, the Suit of Sorrows has gone missing.

At that moment at the Iceberg Lounge, Batgirl attacks Penguin in front of the entire Intergang crew in order to learn the current whereabouts of Batman, but Penguin, insulted after her abrupt attack decides to end his partnership with Batman and he tells Batgirl that he has no idea where has the caped crusader gone. Penguin leaves the lobby and Batgirl is left standing alone. Johnny Stitches calls her from one of the Lounge's tables and offers his services to help her find Batman. After a brief confrontation, Batgirl slams his body on one of the tables and leaves the place, furious rather than satisfied

Meanwhile at Arkham Asylum, all the inmated have been singing the same tune for hours and they all seem to be syncronized. Metamorpho and Grace are in the building talking to Dr. Arkham and he explains them that the Joker managed to deliver copies of a picture to all the inmates in the asylum. The picture consists of a tombstone with the words "Batman R.I.P." engraved on it.

In the city, Commissioner Gordon has turned the Bat-Signal on and has been waiting for too long for Batman to come. Gordon is disheartened when Geo-Force and Katana appear instead of the Dark Knight and after they talk to each other, it is clear that none of them have a clue where Batman is. Gordon fears that Batman might be gone forever and he tells them that there's someone who probably knows what happened to Batman and points to the alley back of the GCPD Headquarters, where Nigtwing is beating the living hell out of some street thugs. Gordon assumes that considering Nightwing's current mood, they probably don't want to know whatever happened to the caped crusader.

Elsewhere, Thunder is talking to Black Lightning about Batman and they realize that nobody knows anything about him. Thunder seems concerned and when Lightning asks her why does she care so much for the man and she replies that after all, he is Batman and the world need him.

At their headquarters, the Outsiders are gathered with no clear direction of what to do. Metamorpho realizes that without Batman, there are no outsiders and Green Arrow seems to think the same way. Batgirl tells them that Batman would want to be there, but Grace replies that if Batman cared for them, he woulnd't have abandoned them. At that moment, Thunder comes in a hurry and tells the others that something important is happening. Thunder turns on the TV and Batman appears on the screen with an important message for all of them as he asks for their help.

Retrieved from "https://dc.fandom.com/wiki/Batman_and_the_Outsiders_Vol_2_11?oldid=2515823"
Community content is available under CC-BY-SA unless otherwise noted.