"The Network": Robert Langtrom walks the dark streets of Gotham City towards the Iceberg Lounge, but even before he could put a step inside, Killer Croc burs from inside fighting a couple of meta-humans transformed into animal

Batman and the Outsiders Vol 2 #13

Appearing in "The Network"

Synopsis for "The Network"

Robert Langtrom walks the dark streets of Gotham City towards the Iceberg Lounge, but even before he could put a step inside, Killer Croc burs from inside fighting a couple of meta-humans transformed into animals and he kills them without remorse. Langstrom reckons that after their return, the villain meta-humans are trying to claim back Gotham from the grasp of Intergang. One of Intergang men tries to attack Croc from behind, but he is turned into a block of ice by Mister Freeze, who seems to be working together with Croc. 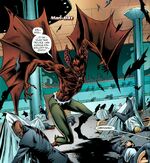 Langstrom manages to get inside the building and soon he is approached by the owner, Penguin, but Langstrom refuses to talk to the man. Instead, he reaches a table where some Intergang men were sitting and he taunts them to attack him. As sson as they lay hands on him, Langstrom begins to transform into Man-Bat and beats all of them with no effort. Penguin approaches him once more and this time he thanks Man-Bat for ridding him of Intergang and he takes the money from the fallen men. Man-Bat tells Penguin to give Intergang a message to step back or face this scenario repeatedly. Man-Bat believes that more Intergang men have arrived to attack him, but when he turns to fight, he is confronted by Batgirl, who following his advice, has come to him to ask his help.

Meanwhile, at Intergang HQ, Johnny Stitches is running bets among the organization in which they decide what happened to Batman and why he has disappeared. While many of the Intergang men have their own theories about Batman's disappearance, Johnny Stitches doesn't really care what happened to him as long as he can keep running crime in Gotham. Outside, a man tries to enter the building and when the bouncer asks for the password, the man pulls out a gun and kills the doorman. People start running away from the scene and the man put on his mask, revealing himself as Vigilante. He gets inside the Intergang HQ and attacks some of the criminals inside until he reaches the main room, where Stitches was located. Soon, both of them get ready to fight, but suddenly Vigilante is attacked by someone invisible and he is pushed out of the building through a window. Vigilante keeps being punished outside until he uses a smoke pellet to locate his agressor and he is finally able to see Spoiler, who explains that she was spying on Intergang to learn about batman's disappearance and couldn't let Vigilante kill more people, following Batman's methods. They fight each other until they are stopped by Batgirl. Vigilante wants to keep fighting but Batgirl incapacitates him and tells them both that she has come to make an offer.

Moments later, Batgirl returned to the Batcave, where she is gathering a list of people, whose combined forces and talents can prove useful enough to replace Batman if they are all working together. Alfred arrives at the cave and after checking the list by himself, he wonders if Batgirl is not choosing people that are seeking redemption, just like herself. However, his major concern is that Nightwing doesn't appear on the list. Batgirl explains that he wouldn't understand and leaves the cave in a hurry. Nightwing arrives shortly after and after realizing what Batgirl has in mind, he decides that they both need to settle things once and for all.

Retrieved from "https://dc.fandom.com/wiki/Batman_and_the_Outsiders_Vol_2_13?oldid=2701221"
Community content is available under CC-BY-SA unless otherwise noted.