The Batmobile is the primary vehicle used by Batman. He keeps several different cars with different uses, but all customized with bat motifs.

Originally, Batman used the same vehicle as he did when he was Bruce Wayne. This vehicle had no special capabilities and it was a simple red convertible.[1]

A short time into his crime fighting career, Batman started using a custom vehicle, designed specially for his missions. This vehicle was a blue roadster with no special capabilities.[2]

Not long after this, Batman redesigned the vehicle and adapted it into a super car. It was a modified, blue two-door sedan with scalloped vertical tailfins and a bat-shaped ornament protecting the front grille.[3] This batmobile was also made of reinforced glass and steel and could withstand even the hardest crashes against other vehicles.[4] Batman changed the design of the vehicle and included red stripes on the middle section on both sides of the vehicle.[5] 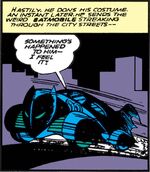 During a chase with the Joker, the Batmobile was extremely damaged after the criminal covered the vehicle with oil and set it on fire. To save their lives, Batman crashed the car against a fire hydrant. The water put out the fire, but the Batmobile was pretty much useless. Batman then had to use the spare Batmobile, which was a model of the previous version.[6]

Bruce decided to upgrade the Batmobile and included a television screen on the front board to enable a direct communication between the vehicle and the criminal profiles from the GCPD.[7]

The Batmobile was majorly upgraded after the first model was damaged beyond repair. The new Batmobile's chassis was extended and it featured a lengthened wheelbase, which provided a larger inner space, which was used to carry along equipment. The design was modernized and the vehicle featured various capabilities that weren't present in the previous version.[8]

A short time later, Batman incorporated remote controls to his vehicles with help from an elder scientist. He could monitor the Batmobile's movements through a screen monitor on the Batcave. Unfortunately, some crooks got hold of the remote control machine and the Bat-vehicles for their criminal purposes. Batman and Robin managed to recover the Batmobile in time, but the crooks took away the Batplane. Before going to recover the Batplane, the Dynamic Duo removed the remote control feature from the already recovered Batmobile.[9]

Some versions of the Earth-One Batmobile were designed and built for Batman by stunt driver Jack Edison, who Batman had rescued from a flaming car wreck.[10] Weapon systems and computer hardware were added by Batman.[citation needed]

The Batmobile was once adapted and transformed into a "firemobile", which resembled a fire truck with the Batmobile's design. Batman and Robin used this Batmobile during their week as Fire Detectives of the Gotham City Fire Department.[11]

Third Batmobile
The Batmobile was modified temporarily on various occasions over a short period of time. Batman included steel sheets on the sides to make the capable of withstand storms, he then used wood to make the vehicle float on water and finally he adapted the wheels to work as a snow-vehicle. All this sudden changes damaged the vehicle's motor to the point that the Batmobile was out of action for a short period of time. During this time, a criminal known as The Racer, outraced the Dynamic Duo, who were using a regular vehicle to chase crooks. When the Batmobile was finally repaired, Batman captured the Racer in a few seconds, proving the vehicle's superiority.[12]

The car was wrecked by a criminal from the future, forcing the Dynamic Duo to use their new prototype vehicle, the Whirly-Bat. When these proved useless, the heroes had no choice but to use the spare Batmobile in order to chase the criminal.[13]

After years of using the same model of the Batmobile, Batman redesigned the vehicle again, removing the main tailfin and changing the vehicle into a convertible sports car. However, many of its previous capabilities were still operational.[14] This version however did not last long, as Batman soon redesigned the vehicle and transformed it into a similar model to a 1960's Cadillac or a Lincoln Futura. This vehicle featured a larger grille and the whole design was much more streamlined, but the convertible feature was still present. The Bat shield on the front also returned,[15] but was quickly removed.[16]

When Batman moved out of Wayne Manor, he left the Batcave and the Batmobile altogether. Instead, he started using a sport car, without any of the distinguishable features present in the Batmobile. This was a decision based on the fact that the Batmobile attracted too much unwanted attention.[17] However, this change didn't last long, as Batman soon started using a sport version of the Batmobile, which featured a bat-face painted on the hood.[18] Eventually, Batman changed the bat-face and replaced it with a Bat-Signal. This change also marked the return of the convertible Batmobile.[19]

During a confrontation with Clayface III, the villain torn off the Batmobile's wheels and turned the vehicle upside down, damaging also the Whyrly-Bat in the truck.[20] Not long after this, the car was destroyed by members of Maxie Zeus' gang, who used a bomb, hoping to kill Batman inside the vehicle. After this, Batman started working on a new model of Batmobile.[21] The new Batmobile surpassed the previous one in terms of capabilities.[22](More info in "Capabilities -1980 " section)

In his early days as Batman, Bruce Wayne realized he needed a method of transportation that allowed him to get around Gotham City in a faster way.[23] He started building the vehicle and in a short time, he had a customized powerful car[24] that Alfred called "Batmobile".[25] Ever since, Batman has been upgrading and updating his vehicles according to the need, changing their design and capabilities. 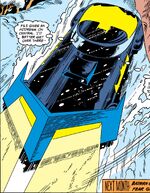 One of the first upgrades was the redesign of the vehicle to make it more slim and built for speed, as it featured aeorynamic designs. The vehicle also included a battering ram in the front, strong enough to pierce through obstacles.[26] Minor modifications were made to this model, but the core design remained the same for some time. This car's structure was bulletproof and it was designed to withstand bombings and fire damage. The batmobile was also designed as a remote control vehicle, allowing the driver to control it from a safe distance. Batman used this capabilities to create a distraction among the ranks of The General.[27] Some time later, Batman used the Batmobile's computer database to find Cornelius Stirk, who was on the loose after the Arkham breakout.[28]

This model of the Batmobile was utterly destroyed when Bruce Wayne tried to activate the vehicle unaware that Jean-Paul Valley had tampered with the access codes and booby trapped it to explode in case of intruders.[29] An older version of the Batmobile was also wrecked when Batman was attacked by Penguin's killer birds and he was forced off the road into the river. The car was completely submerged and it was never retrieved.[30]

Some versions of the Batmobile feature a bat-shaped emblem in the front of the car. This is a specially designed structure that can withstand great damage and can also be used as a battering ram. Batman used this feature to stop a van in which The Riddler was escaping with stolen money.[31]

Robin convinced Batman to take out the new batmobile to test drive it. This version featured a more sport look with red windshields and windows. After chasing down a common criminal, the Batmobile passed the first test.[33] Alfred would keep the vehicle clean after every mission,[34] but after Damian Wayne rescued Alfred from the Black Glove, he used the Batmobile to reach Arkham Asylum. However, he couldn't arrive and instead he pushed an ambulance off a bridge, the same which was being driven by the Joker. Fortunately, the car didn't take any damage.[35]

When Nightwing was attacked in the Batcave by the League of Assassins, he used the Batmobile to attack them and defeated his opponents.[36]

Shortly after, Damian took the newest version of the Batmobile and picked up a girl friend in the city for a joyride. When Oracle located the vehicle, she took the control, ejected the girl out of the car and forced it to go towards Gotham Harbor. However, the vehicle was attacked by Killer Croc and Poison Ivy. Damian managed to get out of, but the car was damaged and sunk on a small lagoon. Damian was rescued by Nightwing and they left the vehicle behind.[37]

At some point, during Dick Grayson's time as Batman, he upgraded the Batmobile, so it could perform minor aereal moves, useful for tracking down escaping criminals.[38]

The Batmobile's diverse array of functions have varied with time. Each version of the car has been improved since the vehicle's creation. Following is a list of the Batmobile's capabilities by decade:

Third Version of the 60's Batmobile

The Batmobile of the 80's

Some versions of the Batmobile feature non-lethal weaponry as well as fire arms and explosives. Some of these weapons include:

Retrieved from "https://dc.fandom.com/wiki/Batmobile?oldid=2740803"
Community content is available under CC-BY-SA unless otherwise noted.