The Batplane was the second aereal vehicle used by Batman on his fight against crime.

The first time Batman used the Batplane on a mission, was to stop the Monster Men from destroying the city. This version of the Batplane was very similar to the first Bat-vehicle, the Batgyro, except it didn't have rotor blades on top. The batplane also featured a mechanical gun on the front for aerial combat,[1] however it was later removed. The next upgrade of the Batplane was the incorporation of the batshaped shield on the front. Besides giving the vehicle a menacing look, the shield also protected the engine of the plane.[2]

In the beginning, the Batplane was usually placed inside an abandoned barn that was connected to Wayne Manor.[3] 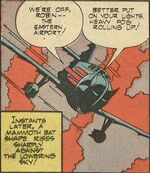 The Batplane had he capability of transforming into a speedboat by retracting its wheels and folding its wings.[4] Shortly after, Batman upgraded the Batplane by making it bigger and added red stripes on the sides of the plane.[5] This model was soon destroyed by some criminals, but it was revealed that there was more than one model in Batman's secret hideout.[6]

For Dick Grayson's ninth birthday, Bruce gave him his own small Batplane, which was an exact replica of the main batplane and it was stored in the same abandoned barn.[7] Some time later, the Batplane was upgraded with jet tubes and also included retractable rotor blades on top, allowing the vehicle to hover over places much more steadily.[8]

Batman and Robin upgraded the Batplane using the blueprints given to them by the renowned vehicle designer Frank Folland. This upgrades allowed the Batplane to become a Bat-Sub by retracting the wings and using torpedoes as underwater propulsion and also, the vehicle could be transformed into a three wheeled car by pulling out wheels from the bottom of the plane.[9] However, this upgrades were temporarily removed on later versions of the plane.[10]

After an unsuccessful military test, the Batplane fell into the hands of some criminals, who made two replicas of the vehicle. Batman and Robin designed and built a new, improved version of the vehicle, which they called Batplane II. The Batplane II was designed as a jet aircraft, meaning it was much more aerodynamic and less bulky. The bat shield was removed from the front and the new plane featured a large variety of functionalities and a great array of equipment, which was more than enough to defeat the criminals who were using the old model of the plane.[11]

A short time later, Batman incorporated remote controls to his vehicles with help from an elder scientist. He could monitor the Batplane's movements through a screen monitor on the Batcave. Unfortunately, some crooks got hold of the remote control machine and started using the Batplane for their criminal purposes. Batman and Robin eventually managed to recover the stolen Batplane and removed the remote control feature from their vehicles.[12]

Taking advantage of the resources of WayneTech's various divisions, notably Wayne Aerospace, Bruce Wayne was able to design modified versions of commercial products for use in his crime-fighting career as Batman. Over the course of several years, there have been numerous versions of the Batplane model.

An early model Batplane was a hybrid fighter jet and helicopter (often referred to as Batplane II). When it became necessary to achieve a higher rate of climb, the helicopter assembly folded down into the fuselage of the craft. Like other versions of the Batplane, Batplane II was equipped with a fully-functioning crime lab, and magnesium flares encased inside of the cone.[citation needed]

As with most of the Bat-Vehicles, the Batplane was capable of following a remote control signal to any location. Batman often used this capability to get away from dangerous situations or simply leave a place quickly.[16]

The Batplane's diverse array of functions have varied with time. Each version of the vehicle has been improved since the its creation.

The current Batplane is a modified Wayne Aviation SlipStream ($46 million sans "extras"). It's detailed to resemble a standard mid-size corporate jet during take-offs and landings. Some of its features and capabilities are as follows:

The following specifications apply to the current model, the Wayne Aviation SlipStream.[18]

Retrieved from "https://dc.fandom.com/wiki/Batplane?oldid=2854044"
Community content is available under CC-BY-SA unless otherwise noted.