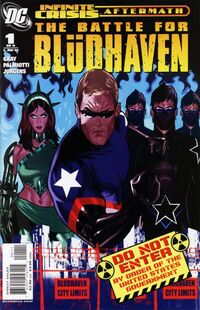 The Battle for Blüdhaven is a six-issue limited series published in the wake of Infinite Crisis. It documented the aftermath of the devestation that city suffered after Chemo, a living chemical waste dump, was used as a weapon of mass destruction by the Society.

Back to Comics Contents : Comics B : Battle for Blüdhaven Vol 1

Retrieved from "https://dc.fandom.com/wiki/Battle_for_Blüdhaven_Vol_1?oldid=2509550"
Community content is available under CC-BY-SA unless otherwise noted.