"A Cold Day in Hell"

A Cold Day in Hell

Battle for the Cowl: Commissioner Gordon #1 is a one-shot with a cover date of May, 2009.

Appearing in "A Cold Day in Hell"

Synopsis for "A Cold Day in Hell"

Commissioner James Gordon wakes up in a dark, cold room and he realizes that he is chained to the ground. Suddenly a voice speaks to him from the shadows and he recognizes his captor as Mister Freeze, who lectures Gordon on the fact that he would have been rescued by now, but this time it won't happen because Batman is dead.

24 hours earlier
Gotham City is under the attack of several street gangs and the Arkham inmates who were freed by Black Mask, while and the National Guard have reached the city. At the GCPD Headquarters, Harvey Bullock is organizing his team to capture the inmates when Gordon burst inside the room and goes straight to his office without even looking at Bullock or his team. When Bullock enters Gordon's office, he watches the Commissioner clearing his desk in an aggressive manner and he questions the reason of his anger. Gordon tells him that he was looking for some matches and Bullock gives him a book of matches before questioning the real reason of his anger. Gordon explains that he just had a meeting with the mayor and that they discussed the previous apprehention of the Arkham inmates. Gordon told the mayor that the GCPD didn't do much, but instead it was Batman who captured them. At that moment, Gordon is informed about a sighting of Mister Freeze and he takes the MCU with him to the place where the villain was spotted.

The police surrounds the place and Gordon breaks inside with a tactical team. They locate Freeze and try to stop him, but using his cold gun he stunns the whole team long enough for him to capture Gordon and get away from the place.

Later, Bullock returns to the GCPD and after 14 hours since Gordon's disappearance, he organizes the Major Crime Units to investigate and find Gordon at any cost.

Gordon wakes up, his body is starting to feel sympthoms of hypothermia and Freeze reminds him of Batman's death. While working with a giant machine on a private experiment, Freeze also tells Gordon that he is trying to teach people how to cope with loss and suffering, just like he learned years ago. When Gordon replies in a defiant manner, Freeze brings up Gordon's tragic past, from the crippling of his adopted daughter, Barbara, the death of his second wife, Sarah and the death of the dark knight. Gordon's memories encourage him to finally realize the truth about Batman and he jumps towards Freeze, attacks him with the chains and breaks free from them. Gordon then takes an important piece of Freeze's machine, stopping the experiment and hides away from the madman. Freeze searches for Gordon and breaks the walls of the place in order to find him. However, Freeze didn't realize that he just broke a gas main and Gordon, taking the matches that Bullock gave him, starts a fire that causes a giant explosion that is noticed by Bullock and the rest of the GCPD from the distance. 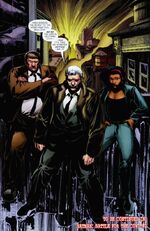 We Are The Law

As the place is burning, Freeze is weakened and Gordon takes the opportunity to defeat him with a pipe, as he finally comes to terms with the fact that Batman is dead. Freeze is left unconscious, but he is glad that Gordon finally accepted the truth.

Some time later, Gordon, Bullock and Detective Peterson are discussing the aftermath of the situation at the rooftop of the GCPD HQ. Freeze will be recovering for a few months before he could stand trial and in the meantime, he will be locked at the Iron Heights prison. Bullock then informs Gordon that Batman has been actively fighting crime, only this time, he has apparently killed all the suspects. Realizing the dangers of this new threat, Gordon turns off the Bat-Signal and solemnly, he decides that it is time for the GCPD to take their rightful position as the law and order in Gotham City.

Retrieved from "https://dc.fandom.com/wiki/Battle_for_the_Cowl:_Commissioner_Gordon_Vol_1_1?oldid=2801875"
Community content is available under CC-BY-SA unless otherwise noted.