"I Am Whatever You Say I Am": <div style="width:100px;float:right;clear:none;margin-right:10px;margin-left:10px;margin-top:5px;margin-bottom:5px;border:1px solid

"I Am Whatever You Say I Am"

I Am Whatever You Say I Am

Am I such an outcast from this group so touched by Gotham's fallen savior? Am I such a monster... that I can't be of any help?

Synopsis for "I Am Whatever You Say I Am"

Robert Langstrom suffers in his laboratory after drinking the Man-Bat Serum and the transformation begins. Once Langstrom becomes Man-Bat, he destroys most of his laboratory and starts lashing against everything he finds until he hurts hiw wife Francine and she collapses dead in front of him. Man-Bat stops his attack and he slowly transforms back into his human form and cries out for the loss of his loved one.

Langstrom wakes up alone in his bedroom after the horrific nightmare and notices that Francine is gone. As he walks towards Francine's office, he finds it empty and Langstrom listens to a message sent to Francine by Oracle asking for her help after Batman's death. Before a short struggle, Langstrom decides to take the Man-Bat serum and transforms into the beast before going out to find his missing wife.

Elsewhere, Lynx is fighting against the Clowns gang, but she is soon outnumbered by them. Lynx is about to lose the fight, but Man-Bat appears and eliminates all the enemies with one single blow. Lynx is grateful for his assistance, but all that Man-Bat wants is to find his wife. At that moment, the Outsiders arrive and dismiss Lynx and Man-Bat from helping out. Man-Bat, thinking that he is not fit enough to help, leaves the place stunning the Outsiders with a sonic burst and flying away.

Using his sonar echolocation, Man-Bat arrives to the Gotham Power Station, looking for Francine. He transforms back into a human and is shocked unconscious when he touches an electric fence by accident.

Later, Langstrom recovers and he notices that there is someone speaking to him. Langstrom has been blindfolded and is sitting in a chair, with bandages over his eyes and arm. The man speaking to him explains Langstrom that he suffered burns on his arms and eyes, but that he should be fine with time. The mysterious man knows everything about Langstrom and his Man-Bat persona, and Langstrom tries to move, but he discovers that his right foot has been chained to the wooden floor. 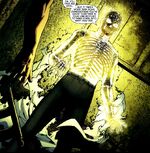 Langstrom reachs for a chair and using the man's voice to his advantage, Langstrom attacks the mysterious man and removes the bandages from his eyes. Langstrom discovers that his attacker has stolen the Man-Bat serum from him and the man reveals himself as Doctor Phosphorus before destroying the serum. Langstrom smashes his free foot on the ground and breaks the wooden floor underneath, falling to a dark basement and breaking the chains. As he recovers form the fall, he notices that Francine has been trapped in the basement and they find an opportinity to escape through an open window.

On their way outside, Langstrom tells his wife that he can't transform as the serum is lost and they have to escape making a great effort. Phosphorus starts chasing them outside the power plant through the lamp posts and attacks them outside on the streets. He grabs Francine and tries to kill her and Langstrom, who after watching his loved one in danger, starts changing and transforms into Man-Bat.

The flying beast attacks Phosporus, grabs him and takes off with, taking the villain with him, away from Francine. Man-Bat flies towards the docks, where he dives into the water, holding Phosphorus very tightly. The Outsiders follow the trail of the fight towards the water and they witness how Phosphorus' light fades away in the water and Man-Bat rises from the depths. The creature is badly burnt, but at the sight of Francine, he changes back to his human form once again. Shocked by the fact that he was able to transform at will and without the need of the serum, Robert Langstrom runs away from his wife and the Outsiders, who are left in shock as a Bat-Signal with the "R.I.P." letters in it.

Appearing in "I Am Whatever You Say I Am"

Retrieved from "https://dc.fandom.com/wiki/Battle_for_the_Cowl:_Man-Bat_Vol_1_1?oldid=2511859"
Community content is available under CC-BY-SA unless otherwise noted.