Batwing is an ally of Batman who uses hi-tech equipment to fight crime. The original was David Zavimbe, the Batman of Africa, who operated in the Democratic Republic of the Congo. As a civilian, he was a police officer in the city of Tinasha fighting against corruption in the department. He became Batwing after he was supplied with a powerful exo-skeleton by the original Batman. He has been a member of Batman Incorporated, the Batman Family, the Kollektiv and Justice League International.

After Zavimbe retired, he was succeeded by Luke Fox, an American and the son of Bruce Wayne's close business ally Lucius Fox. Luke Fox is a tech genius like his father but also had a successful career as an MMA fighter before becoming a vigilante, making him both brilliant and physically mighty. With the Batman Family, he protects Gotham City using a special hi-tech suit. Batwing was created by Grant Morrison and Chris Burnham, first appearing in Batman Incorporated #5. (2011) 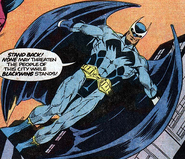 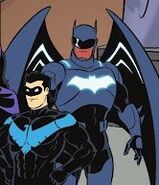 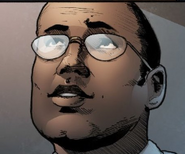