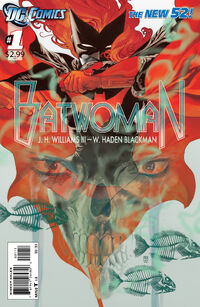 Batwoman (Volume 2) is the first solo series featuring the character of Batwoman in a permanent leading role. She previously appeared in 52 and temporarily headlined Detective Comics in her starring role in issues 854-863, and had a zero that shipped on November 24th, 2010.

The first issue was solicited for spring 2011, but after being delayed, the series started up again as part of the relaunched post-Flashpoint DC Universe under The New 52 branding in September of 2011.

Back to Comics Contents : Comics B : Batwoman Vol 2

Retrieved from "https://dc.fandom.com/wiki/Batwoman_Vol_2?oldid=2741437"
Community content is available under CC-BY-SA unless otherwise noted.