Billy Batson and the Magic of Shazam! (Volume 1) 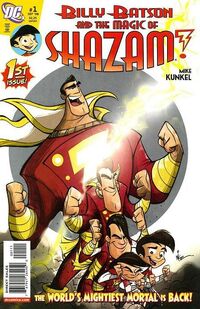 Billy Batson and the Magic of Shazam was an ongoing series written, drawn and developed by Mike Kunkel, with Jann Jones as the series editor. The series was a reinterpretation of Billy Batson and his younger sister Mary as they develop their powers and responsibilities using elements of various interpretations of the characters including the recent series where Billy pretends to be his dead father in his Captain Marvel persona.

Retrieved from "https://dc.fandom.com/wiki/Billy_Batson_and_the_Magic_of_Shazam!_Vol_1?oldid=2356687"
Community content is available under CC-BY-SA unless otherwise noted.