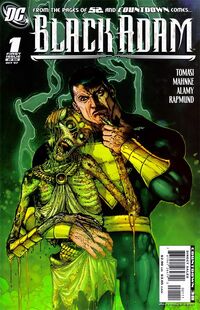 Black Adam: The Dark Age is a six-issue limited series published from October of 2007 to March of 2008. The series focuses on the titular villain Black Adam and his actions following the climax of World War III. Black Adam was a central figure in the weekly limited series 52, and the after-effects of his actions in this series have repurcussions in 52's follow-up title Countdown.

Back to Comics Contents : Comics B : Black Adam: The Dark Age Vol 1

Retrieved from "https://dc.fandom.com/wiki/Black_Adam:_The_Dark_Age_Vol_1?oldid=2466878"
Community content is available under CC-BY-SA unless otherwise noted.