Black Alice is a teenage superhero and magic-user. Her powers let her steal the abilities of any other magic-user, which makes her incredibly strong although she often lacks control. Raised in Ohio, she became a vigilante when her mother died of a pill overdose. Her signature style is very alternative, and she is considered a social outcast among her peers. Despite this, she has friends in her local Wiccan circles. She has been involved with the Birds of Prey, the Coven of Three, and the Secret Six. Black Alice was created by Gail Simone, Joe Prado, and Ed Benes, first appearing in Birds of Prey #76. (2005) 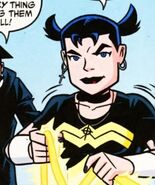 Helmet of Fate: Black Alice #1
(May, 2007)
Community content is available under CC-BY-SA unless otherwise noted.
Advertisement