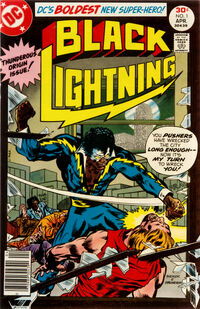 Black Lightning (Volume 1) was an ongoing series published by DC Comics from April of 1977 to December of 1978. The series introduced the character of Jefferson Pierce, aka, Black Lightning and was DC's first ongoing title to feature an African American super-hero. The first ten issues of the series was written by Tony Isabella with the final issue being written by Dennis O'Neil. The series took place in the neighborhood of Suicide Slum in Metropolis. Recurring guest stars included Superman, Jimmy Olsen and Inspector Henderson. Black Lightning's primary adversaries in this title were the criminal organization known as The 100 and its known associates including Tobias Whale, Syonide and the Cyclotronic Man. Black Lightning was one of more than thirty-five DC Comics titles that were discontinued as part of the 1978 DC Implosion. The story that would have been featured as Black Lightning #12 was later published in World's Finest Comics #260 and Cancelled Comic Cavalcade #1. Events from this series were later re-imagined in the 2009 limited series Black Lightning: Year One.

Back to Comics Contents : Comics B : Black Lightning Vol 1

Retrieved from "https://dc.fandom.com/wiki/Black_Lightning_Vol_1?oldid=2673098"
Community content is available under CC-BY-SA unless otherwise noted.