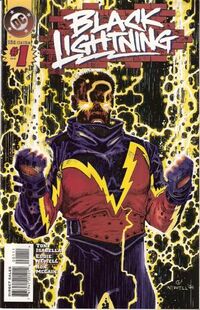 Black Lightning (Volume 2) was an ongoing comic book series published from 1995 to 1996 spanning a total of thirteen issues. The series featured the titular hero Black Lightning. The series was written by Black Lightning creator Tony Isabella and primarily illustrated by Eddy Newell. Controversial disputes between Isabella and the series editors led to Isabella being fired from the title after issue #8.[1] He was replaced by David DeVries who finished out the series.

Back to Comics Contents : Comics B : Black Lightning Vol 2

Retrieved from "https://dc.fandom.com/wiki/Black_Lightning_Vol_2?oldid=2626344"
Community content is available under CC-BY-SA unless otherwise noted.