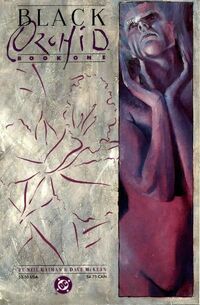 Black Orchid (Volume 1) was a three-issue limited series published by DC Comics in 1988. Bringing the heroic character of Black Orchid back into the spotlight, the series was written by Sandman scribe, Neil Gaiman with painted illustrations by Dave McKean. All three issues were collected in a trade paperback edition in 1991. DC followed up the mini-series, with an ongoing title which began publication in 1993.

Back to Comics Contents : Comics B : Black Orchid Vol 1

Retrieved from "https://dc.fandom.com/wiki/Black_Orchid_Vol_1?oldid=1478618"
Community content is available under CC-BY-SA unless otherwise noted.