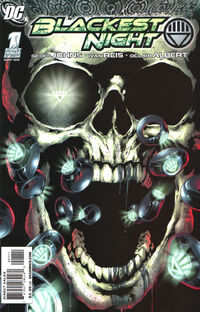 Blackest Night Vol 1 is the main storyline of the Blackest Night, the third and final part of the War of Light trilogy developed by Geoff Johns and Ethan Van Sciver. Van Sciver was originally intended to be the main artist on the series, but had to pass due to work on The Flash: Rebirth, and was replaced by Ivan Reis. The series details the Green Lantern Corps, the Justice League, the Justice Society, and the Teen Titans struggling against the Black Lantern Corps, composed of the reanimated corpses of some of their closest friends and deadliest enemies.

Back to Comics Contents : Comics B : Blackest Night Vol 1

Retrieved from "https://dc.fandom.com/wiki/Blackest_Night_Vol_1?oldid=2466211"
Community content is available under CC-BY-SA unless otherwise noted.