Bleez was the daughter of Lord Recco and Lady Bluuz, a very influential family on her home planet of Havania. She grew to be the most beautiful woman on her planet and had many suitors who wished for her hand in marriage. However, she turned down all her suitors and some of them grew angry for this denial. Two particular individuals- Baron Ghazz and Count Liib made contact with a well-known member of the Sinestro Corps, and convinced him to attempt to court Bleez- knowing that she would reject him because he had no wings.[1]

When the Yellow Lantern was turned down by Bleez he was infuriated and decided to kill Bleez's family and kidnap her. Bleez was raped multiple times by the Lantern and his comrades and the despair and hatred eventually called upon a Red Ring and she became a Red Lantern. Driven completely incoherent by her blinding rage, she was brought to Ysmault where she joined the Red Lantern Corps under their leader Atrocitus.[1]

Mysteriously a Red Lantern's ring had left him and was heading in an unknown location. Curious about what was going on Atrocitus sent Bleez to investigate the situation. Bleez tracked the Ring to planet Earth where she discovered that it had gone to a Green Lantern named Kyle Rayner.[2] As it turned out a member of each corps (except Orange and Blue) also showed up as a ring from their corps' had also travelled to Kyle. All four of the Lanterns including Bleez agreed that Rayner was responsible for this irregularity and attacked the Green Lantern, however the Star Sapphire 'Fatality' stopped Bleez, Yellow Lantern Arkillo, and Indigo Tribe Member Munk from attacking Rayner as she believed there was a peaceful answer to the situation.[3] 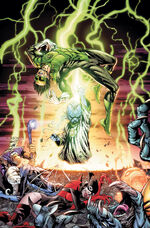 Before Bleez could retrieve the ring Saint Walker of the Blue Lantern's appeared and helped Rayner escape. Bleez and the other Lanterns then followed Rayner and Walker to Oa, home planet of the Green Lantern Corps.[3]

Upon entering Oa space Walker told the group that Rayner was on the service trying to figure out was happening with the Guardians of the Universe, hearing this Bleez rushed down to the service and with the other lanterns burst into the Guardian's chamber. As it turns out the Guardians had turned on Rayner and Rayner had put all the rings on, however the power of all the rings was too much for him and all the rings had broken except for the Green Power Ring and the Orange Power Ring.[4] The Orange Ring had then revealed itself to be an Sentient Orange construct called Glomulus. The team then helped Rayner fight the Guardians but were overwhelmed until Larfleeze and his pet Guardian Sayd showed up.[4] The team, dubbed the 'New Guardians' helped Larfleeze battle the Guardians and Munk teleported the whole group to Okaara. Saint Walker then attempted to cure Bleez but she fled back to Ysmault.[5]

Upon returning to Ysmault Atrocitus was dissatisfied by Bleez's work, in need of at least one intelligent Lantern to be his advisor he threw Bleez into the Blood Ocean. Within the ocean neurons inside Bleez's mind opened giving her back her intelligence and memories. Some time later she emerged from the ocean with her mind restored. However Bleez was traumatized as she was made to remember what had happened to her, and what the Lantern did to her. Realizing she had little use in this state Atrocitus brought Bleez to her home planet of Havania.[1] Atrocitus then told Bleez that her downfall at the hands of the Yellow Lantern was a conspiracy made by a few rich people. 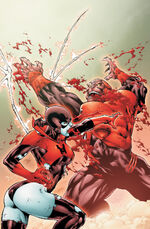 After ridiculing her mother's grave for all the suitors she had sent her way, Bleez and Atrocitus stormed one of the lords castle discovering Count Liib and Baron Ghazz were present, Bleez then ripped Liib's head clean off and Atrocitus impaled Ghazz. Feeling that her vengeance was complete Bleez and Atrocitus returned to Ysmault where Bleez began helping Atrocitus to coordinate his war on evil.[1]

Very soon after regaining her intelligence Atrocitus threw her fellow Lanterns Zilius Zox, Skallox and Ratchet into the Blood Ocean as he believed more intelligent Lanterns would be necessary for his crusade of vengeance. Atrocitus then travelled to the tomb of Krona the mad guardian and discovered that his corpse was missing.[6] Infuriated that his greatest enemies body was missing he blamed Bleez for the strange turn of events but she pointed out that in his deceitfulness he could have faked his death. Skallox, Ratchet and Zilius Zox then emerge from the Ocean and Atrocitus declares a man hunt.[7] Bleez managed to get on Atrocitus' bad mood once again, however this time she was able to fight back due to Atrocitus' dying rage. After this skirmish Bleez begins to plot against Atrocitus recruiting several Lanterns to her cause and placing spies into Atrocitus' loyalists.[8]

During the hunt for Krona Bleez learnt that a artificial copy of the Vegas System had entered the universe and Larfleeze had sent the New Guardians there to investigate as he informed them that whoever sent the rings to Rayner was probably in the artificial system.[9] Deciding to assist her allies in the other corps she travels to the Vegas System and enters one of the planets, within that planet she finds the New Guardians battling a being calling itself Invictus the archangel, the team were attempting to negotiate with him but upon Bleez's arrival he was provoked and began attacking the whole team again. However even the combined might of seven lanterns wasn't enough as the hole team were quickly defeated. Invictus agreed to let them go if they killed Larfleeze for him. 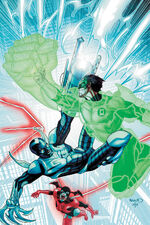 Bleez and Rayner's run in with the Blue Beetle

As it turned out Invictus was from an ancient and divine race that were all but extinct, with his people at his side they had brought peace and tranquility to the Vegas System.[10] However Larfleeze wiped all his people out because he was unable to absorb their souls. However Invictus survived as he attempted to fling Larfleeze into another universe, this backfired and he himself was flung into the universe. In the other universe he built a copy of the Vegas system before it was corrupted by the angels' absence and planed to replace the Vegas system with his Vegas system.[10]

With this knowledge in hand the Lanterns learned of the Sinestro Corps recent fall and split up to retrieve their power batteries.[11] Bleez and Glomulus escorted Rayner to Earth where they found the Blue Beetle scanning the Green Power Battery. After a brief fight with the hero the group were attacked by a mercenary who destroyed Glomulus. After defeating the mercenary Bleez and Kyle split up with Kyle going to assist the Blue Lanterns on Odym with a Reach invasion and Bleez returning to Ysmault to help with the hunt for Krona.[12]

She later rejoins Rayner's collection of Lanterns, as they fight off Invictus at the Orrery. After that the Star Sapphire Fatality tried to convert her in which she failed.

When Guy leads a civil war against Atrocitus, she sides with Guy. 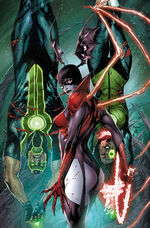 Green Lanterns at the mercy of Bleez

Ysmault was slowly decaying due to the death of the Butcher. Atrocitus hatched a plan to convert Earth into the new home planet of the Red Lantern Corps as it was already full of rage. He sent Bleez to grow a Hell Tower, this would enthrall the entire population turning them into rage imbued drones. Bleez travelled to Earth where she enthralled a man into protecting the location of the tower and to make sacrifices for the tower to grow.[13] Weeks after this the Bleez and Atrocitus with the rest of the Corps descended to Earth while the tower was enthralling the populace. Atrocitus sent Bleez to kill the two Green Lanterns of Earth- Simon Baz and Jessica Cruz, as he believed they would be problematic to his conversion of the planet. She engaged the pair in battle and discovered that they were no match for her power, however Baz used his special Emerald Sight power to shock the rage out of her.[14]

With the rage removed from her system Bleez attempted to kill herself due to all her past actions, Baz stopped her however and told her she could have her life back. She agreed and told Baz about Atrocitus' plans. Shortly after this Baz's partner Cruz returned and attacked Bleez, this pushed the rage back into her and she became her infuriated self once again.[14] She quickly fled Earth from both the Lantern Corps and began to reevaluate her future seeing she no longer needed to be a Lantern.[15] Upon returning to Ysmault Atrocitus informed Bleez that Dex-Starr had planted the rage seed in the earth's core that would create a new rage entity that would take over the planet eventually, however the Green Lanterns were able to take down the Hell Tower ending the immediate transformation.[15]

"With blood and rage of crimson red,
ripped from a corpse so freshly dead
together with our hellish hate,
we'll burn you all, that is your Fate!"

Retrieved from "https://dc.fandom.com/wiki/Bleez_(Prime_Earth)?oldid=2734286"
Community content is available under CC-BY-SA unless otherwise noted.