Blüdhaven was a former whaling town, which was officially incorporated as a "Commonwealth" in 1912. The town had a generally poor socio-economic populace, owing in part to failed efforts to transform itself into a manufacturing and shipping center.

Blüdhaven, often simplified as Bludhaven, is a city in New Jersey between Gotham City and Atlantic City. When he struck out on his own, Nightwing used the city as his base of operations, and had his hands full with the criminal element. The city was destroyed by the Society during Infinite Crisis and has been a nuclear wasteland since.

Blüdhaven was a former whaling town, which was officially incorporated as a "Commonwealth" in 1912. The town had a generally poor socio-economic populace, owing in part to failed efforts to transform itself into a manufacturing and shipping center.

The city lived through a corrupt balance of underhand dealings and unlawful policies, which was helped kept in check by the local police force. When the mastermind Blockbuster started making moves into Blüdhaven, so too did Nightwing who was following up on the murder of 21 gang members who had washed up in Gotham City's estuary. As the city's first hero, Nightwing ended Blockbuster's criminal stranglehold over the city and helped clean up its corrupt police force. Nightwing left the city soon after however, out of guilt for allowing Blockbuster's death at the hands of the vigilante Tarantula.

Following the events of Identity Crisis and War Games, Timothy Drake, the third Robin, moved to Blüdhaven in hopes of escaping his father, Jack Drake and Stephanie Brown's deaths. Once he moved there he became embroiled in a plot set by the Penguin. Robin was beaten by Shrike but Batgirl came to his assistance, also aiding him in an attack against the Penguin. As with Robin, Batgirl is shown setting up shop in Blüdhaven. She gets her own Batcave and attempts to gain an interest in the neighborhood. However events occur that lead the two heroes away from the city; Batgirl in her search for her biological mother and Robin during his recruit trail with the Veteran. 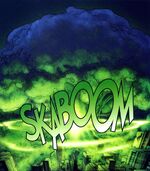 During the Infinite Crisis, Blüdhaven was the site of a massive attack by the Secret Society of Super-Villains. As an act of vengeance against Nightwing, the Society dropped a quasi-sentient vat of deadly radioactive chemicals (colloquially known as "Chemo") onto the city, causing widespread destruction and mayhem.[1] Many of Earth's heroes came to Blüdhaven's defense in a bitter struggle to save as many lives as possible. The disaster proved so massive, that U.S. President Jonathan Horne placed the entire city under quarantine. A new government-sanctioned super team code-named "Freedom's Ring" took charge of Blüdhaven, and ordered all remaining metahumans to leave the city.[2]

One year later, the quarantine structure known as "The Wall" had become a permanent structure, and displaced citizens comparing the immediate area to the Gaza Strip. Many lived in refugee camps that have sprung up around the wall while the superhero Monolith helped to keep the peace. Within the city, Father Time commanded American forces, ordering his men to shoot and kill any heroes (referred to as insurgents) who entered the city. His forces also erected internment camps in which experiments were conducted upon American citizens. Also active in the city were the Atomic Knights, who ran an 'underground railroad' in an attempt to smuggle citizens out of the city. During this time the Society of Evil sent in teams in an attempt to locate the source of the nuclear leak, eventually discovering an injured Captain Atom held in captivity by Father Time's forces. Also during this time the Teen Titans re-entered Blüdhaven to ascertain why the area was still closed off, discovering the experiments in the process. During an engagement between the four forces, the Atomic Knights placed Captain Atom in a containment suit designed to limit his radiation output, similar to the armor worn by Monarch. Atom, having awoken and ended the battle, then delivers a warning, telling anyone who wants to live to evacuate the city. After the evacuation, Captain Atom unleashed a nuclear explosion, destroying what was left of Blüdhaven and leaving a radioactive crater in its place.[3]

The remains of Blüdhaven later became the target of interest for the artificial intelligence known as Brother Eye. Brother Eye was alerted about residual activities in Blüdhaven and reactivated its offensive protocols. Creating a new army of OMAC cyborgs, it took control of the city. The Atomic Knights and the time-displaced Karate Kid and his colleague Una were present during the OMAC attack. Una was assimilated by Brother Eye's programming and was transformed into an OMAC. Brother Eye, having upgraded itself with technology from Apokolips, activated a Boom Tube to travel to Apokolips, where it began transfiguring the natives there in a cosmic game between Darkseid and the Monitor Solomon.[4]

Bludhaven was used by Darkseid as the Base of Operations for his plan to conquer the Earth. After the subsequent battle, the majority of the city was completely destroyed.[5]

Retrieved from "https://dc.fandom.com/wiki/Bludhaven?oldid=2805116"
Community content is available under CC-BY-SA unless otherwise noted.