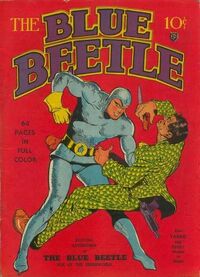 Blue Beetle began publication in 1939 under a company known as Fox Features Syndicate. The series featured Dan Garrett, the original Golden Age Blue Beetle and lasted fifty-nine issues. When Fox Features Syndicate ran into financial difficulties in 1942, Holyoke Publishing (who was also a printer, and to whom Fox owed money) took over the publication with issue 12. In 1944, when Fox was back on their feet, Fox resumed publishing Blue Beetle with issue 31.

DC Comics now owns the Blue Beetle, but does not own the various backup features that appeared in this volume of Blue Beetle. Therefore, only the Blue Beetle stories are indexed fully.

Back to Comics Contents : Comics B : Blue Beetle Vol 1

Retrieved from "https://dc.fandom.com/wiki/Blue_Beetle_Vol_1?oldid=2693313"
Community content is available under CC-BY-SA unless otherwise noted.