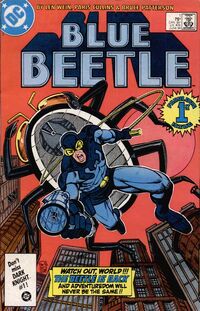 Blue Beetle (Volume 6) was the first ongoing Blue Beetle series published by DC Comics after the character was acquired from Charlton Comics. The series starred Ted Kord, the second Blue Beetle. It began in June of 1986, and ran for a total of twenty-four issues ending in May 1988.

Back to Comics Contents : Comics B : Blue Beetle Vol 6

Retrieved from "https://dc.fandom.com/wiki/Blue_Beetle_Vol_6?oldid=2586171"
Community content is available under CC-BY-SA unless otherwise noted.