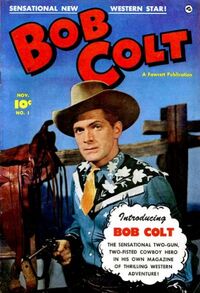 Bob Colt featured stories of western hero Bob Colt. It was originally published by Fawcett Publications, and was acquired by DC Comics when DC bought Fawcett's comic book assets in 1991.

The comic was designed to look like a licensed comic based on an existing movie star, but there was no movie star named Bob Colt. Bob Colt is a fictional character, created by Fawcett and now owned by DC. The man on the photo covers is male model Bob Holland.

Back to Comics Contents : Comics B : Bob Colt Vol 1

Retrieved from "https://dc.fandom.com/wiki/Bob_Colt_Vol_1?oldid=1478644"
Community content is available under CC-BY-SA unless otherwise noted.