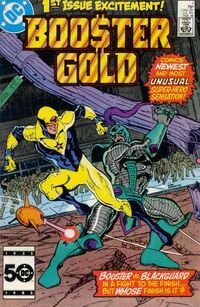 Booster Gold was an ongoing comic book series published by DC Comics from February of 1986 until February of 1988. Introducing the 25th century super-hero Booster Gold, the series lasted for only twenty-five issues, but the titular hero became a regularly appearing character in the DC Universe and a member of the Justice League of America.

Back to Comics Contents : Comics B : Booster Gold Vol 1

Retrieved from "https://dc.fandom.com/wiki/Booster_Gold_Vol_1?oldid=2691196"
Community content is available under CC-BY-SA unless otherwise noted.