Despite all their inane boasting, Mallah and Brain ran a massive weapons trafficking business.

The Brain is the leader of the Brotherhood of Evil, arch-enemies of the Doom Patrol.

Although at one point a brilliant scientist, a tragic accident has left him merely a brain in a metallic case, with no other ways to preserve him. The accident might have been caused by Niles Caulder, and he has sworn his revenge. While he is capable of communicating and masterminding brilliant criminal exploits, there is little else he can do. He is most frequently seen with his companion and lover Monsieur Mallah, a super-intelligent gorilla with a machine gun.

Following his death, the man's assistant was able to preserve his brain in a liquid filled container. The Brain became the head of the Brotherhood of Evil, whose secret headquarters was in an exclusive girls' school in Paris.[1] Under his leadership, the Brotherhood became the most powerful crime syndicate in the world.

The Brain seldom allowed others to know he was a disembodied brain.

The Brain had taken a superior ape (Monsieur Mallah) and, through secret teaching methods and shock treatments, gave the ape an IQ of 178 - genius status (above 160).

Eventually the Brain's plans led him into conflict with the Doom Patrol.

The Brain in another version of his "body".

After a battle with the Teen Titans some years ago, Mallah discovered his fist was covered with blood from Beast Boy. Brain took the blood and used it to create a crude clone. This began one of their more lucrative ventures, creating clones of various humans and selling them to wealthy clients. Though none of the clones were perfect duplicates of the metas from whom they were cloned, and though all of them suffered from cellular self-degeneration, Mallah and the Brain were nonetheless successful at selling them. At their height, they even managed to obtain some of Superman's blood and clone him, but the resulting aggregate was so powerful that they had no assurance that it could be controlled. The degeneration problem was eventually brought under control with a topical antibacterial retardant. 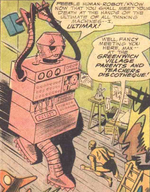 The Brain as Ultimax.

Despite the success, the Brain grew frustrated and depressed by his own lack of a body and subsequent inability to consummate his love for Mallah. Worse, the methods that had been used to make his brain viable outside of a body had made his DNA unreplicable. Fearing that his beloved master would kill himself, Mallah suggested a partnership with Dr. Thaddeus Sivana, hoping that the mad industrialist might figure out something that Mallah and the Brain had not realized.

While trapped on the government's Prison Planet, the Brain and Monsieur Mallah arrive at Joker's camp, and Mallah asks Grodd to speak with him away from the others.

Mallah proposes to Grodd that as fellow Gorillas, the natural kings of the jungle, they should team up, surely through their combined might being able to rule the entire place by themselves. Grodd laughs at Mallah for considering himself, an "absurd science experiment," comparable to "a proud child of Gorilla City." Mallah strikes Grodd and calls him a beast, causing Grodd to fly into a rage and try to kill him. Although Mallah also has a gun, and shoots Grodd several times, Grodd still has the upperhand, and is about to kill Mallah when Brian interjects, pleading for Mallah's life. Thinking better of it, Grodd picks Brain up, and beats Mallah to death with Brain, smashing Brain's protective hull in the process, and killing him as well. Before eeking out his last breath, Mallah says he dies happy, taking solace in that he and Brain will finally be able to be together forever.[2]

Retrieved from "https://dc.fandom.com/wiki/Brain_(New_Earth)?oldid=2705790"
Community content is available under CC-BY-SA unless otherwise noted.