Vril Dox is the son of Brainiac, a super-intelligent Coluan who seeks to redeem his father's evil legacy through heroic actions. Despite his benevolent motivations, he is renowned across the universe as a ruthless and manipulative bastard who will sacrifice anything for his own ends. He is founder of the inter-galactic police agency L.E.G.I.O.N., which he developed in the aftermath of Invasion!. His son is the villainous Brainiac 3, who once usurped his authority leading to Vril's creation of the R.E.B.E.L.S.. During Blackest Night he was briefly initiated into the Sinestro Corps based on his ability to inspire fear. Brainiac 2 was created by Edmond Hamilton, Cary Bates and Curt Swan, first appearing in Superman #167. (1964)

Mr. D.
Elseworlds
The Spy Who Fragged Me 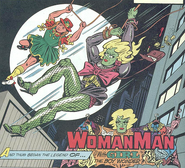 Brainiac 2
Legion of Super-Heroes in the 31st Century
Comics-only
Community content is available under CC-BY-SA unless otherwise noted.
Advertisement