Brion always had a big heart. A forgiving heart. A heart filled with emotion.

Brion Markov is Geo-Force, a powerful super-hero and member of the royal family in Markovia. His powers allow him to control gravity and the Earth's terrain. This has led him to become a long-standing member of the Outsiders, and he later joined the Justice League. His half-sister is Terra of the Teen Titans.

Brion Markov first assumed the role of Geo-Force when his native country, Markovia, was invaded by the forces of the marauder Baron Bedlam. Brion's father, King Viktor, was killed in this conflict, and Brion's older brother, Gregor, ascended the throne of Markovia. In an attempt to save his country, Brion was instilled with his powers by the scientific discoveries of Dr. Helga Jace. Dr. Jace originally intended to give super-powers to both Brion and his older brother, Gregor, but Gregor openly scoffed at Dr. Jace's researches.[1] During the invasion, Brion also encountered the costumed adventurers Batman, Metamorpho, Black Lightning, Katana, and Halo. After the invasion was repelled, Brion decided to travel to America to learn how to use his powers under the tutelage of the Batman. together he and the others made up the costumed super-team known as the Outsiders.[2]

As part of the Outsiders, Brion had to deal with following Batman's orders, something he wasn't used to. However, after a rough start, Geo-Force to follow orders without being consulted as to his opinion.[3]

In one of their earliest missions, the Outsiders teamed up with the Teen Titans, who were led at the time by Batman's sidekick, Robin. It was during this adventure that Geo-Force was reunited with his half-sister Tara Markov, also known as Terra of the Titans.[4][5] Tara was the product of an affair King Markov (Brion's father) had with an unnamed American woman. Fearing scandal, the king sent Tara to be raised in the United States. Unbeknownst to Geo-Force and her fellow Titans, Terra was secretly a spy working for Deathstroke.

In the climatic battle between the Titans and Deathstroke, Terra died. At first, the Titans did not tell Geo-Force of her betrayal, letting him think that she died a hero. At a later date, however, Batman revealed the truth to Geo-Force, which left him even more heartbroken than before.[6] In his depression, Geo-Force could not bring himself to continue wearing his "earthtone" costume, as it reminded him of Tara, who wore a similar uniform. His teammates presented him with a new green and gold costume to, a gift he gladly accepted, as the colors had dual importance to Geo-Force.[7]

In order to keep his identity concealed, Brion had to take up classes in Gotham City and became a college student.[8] However, inadvertently, Brion started developing romantic feelings for his friend and member of the Outsiders, Halo. Eventually, they both realized that the interest was mutual and started a romantic relationship.[9] However, Halo was taken away to Missouri when they found her real family and after months of separation, their relationship faded away. When they reunited during Christmas, they broke up in good terms. It was also during this time that Geo-Force learned of her friend and classmate, Denise Howard's suicide attempt and he tried to kill the responsible, but he was stopped by Superman, who made Brion understand a valuable lesson.[10] After his heroic act, Brion started dating Denise.[11]

After the Outsiders split with Batman, they were privately funded by Markovia. During this time, Geo-Force was the unofficial new leader of the team. However, the secret eventually came out and Major Disaster destroyed their base. The United States government withdrew any foreign aid from Markovia until that nation released the true names of the Outsiders. Before King Gregor (Brion's older brother) could make a decision, he was murdered. Brion became king, but he was forced to abdicate and was imprisoned when his sister-in-law, Iona (Gregor's wife), revealed she was pregnant. His teammate Looker revealed to Brion that the murderer of his brother was Dr. Jace, who was, in fact, working for the Manhunters. After fighting the Manhunters, the Outsiders disbanded.[12]

Brion takes Denise Howard to live with him in Markovia. Their stay is complicated when Castle Markov appears to be haunted, but this is revealed to be the work of the Untouchables.[13]

The second incarnation of the Outsiders was born when, appropriately enough, a number of heroes again met up in Markovia. Former Outsiders Geo-Force, Katana, Halo and Looker were joined by new heroes Faust, Technocrat and Wylde. Roderick, an evil vampire, killed Queen Ilona and framed Geo-Force for her murder. Geo-Force and the other Outsiders were wanted fugitives until they managed to clear their names and vanquish Roderick.

During that time, another Terra had appeared, seemingly tossed from time, along with a group known as the Team Titans. Geo-Force met her and wanted desperately to believe that she was his resurrected sister. The new Terra, however, convinced him this was not the case.

Further revelations revealed that this Terra was in fact from their time, and that the 'original' Terra's body was missing from her coffin.

Brion invited Terra to live in Markovia, which she accepted, as her group of Titans were disbanding. In Markovia, Markovian scientists conducted a DNA test to discover if Terra was in fact the original Terra. She herself was in fear of the results, afraid that she might in fact be a villainous traitor. Although Brion mercifully told her the results were negative, they were in fact positive, and he remains the only person to have this knowledge.

Brion married his long-time girlfriend, Denise Howard, and serves as regent of Markovia until his nephew is of age.[14]

Geo-Force becomes a member of the Justice League of America. He was involved in a training exercise at the JLA HQ which if not for his gravity controlling abilities Red Arrow would have possibly been killed by the winds of an unresponsive Red Tornado.

Brion rejoined the Outsiders under the leadership of Batman, but shortly after, Batman disappeared without a trace and the team started looking for him all across Gotham. Geo-Force and Katana went to the GCPD Headquarters to answer the beckoning of the Bat-Signal and ask Commissioner Gordon about Batman's location, but the old man knew as much as them. Instead, he urged them to talk to Nightwing, who wasn't exactly in a good mood.[15]

After the explosion that destroyed the Outsiders HQ, killed REMAC and left Thunder in a coma, Brion decided to leave the team for good.[16]

Geo-Force is seen with Black Lightning, contemplating murdering Deathstroke for beginning Terra's psychosis and eventual breakdown. Geo-Force convinces Deathstroke to go to the alley where Jericho, his son, had his throat slit all those years ago, rendering Jericho unable to speak. Deathstroke defeated Geo-Force but explained that because Brion had Terra's powers now, the psychosis that Terra had was going to set in on him. Geo-Force refused to believe this and did the only thing he could to stop Deathstroke from taking him over like he did to Terra: he slit his throat, bring back painful memories to Deathstroke. Deathstroke tries to save Brion but Brion stabs him in the stomach with Deathstroke's own sword. In that, Brion believes that he took revenge on Deathstroke for what he did to Terra.[17] 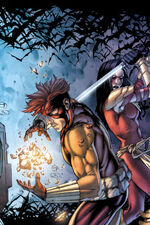 Some time later, Brion became the leader of the Outsiders and ruler of his country, Markovia. When word about a killing attempt against him became known, he tried to keep the calm on the streets, as people started creating riots everywhere. After an unknown attacker actually tried to kill Brion, the Outsiders and himself followed the mysterious vigilante Insider as the man responsible for the attack. Geo-Force was the last opponent of Insider and after blasting all his energy against him, the Insider used the same energy to stun Geo-Force and left him unconscious long enough for him to escape. Brion was taken back to Castle Markov, where he was healed from his battle wounds.[18]

Retrieved from "https://dc.fandom.com/wiki/Brion_Markov_(New_Earth)?oldid=2865442"
Community content is available under CC-BY-SA unless otherwise noted.