Church of Blood · The Red

My acolytes... find them! Bring them to your Brother Blood! Morons.

Brother Blood was seen to be obsessed with accessing The Red, the environmental force that connects all animal life via the Life Web.

In his first diabolical plan to access The Red, Brother Blood trapped Beast Boy in order to obtain his blood, only to be defeated by his allies the Ravagers.[1] 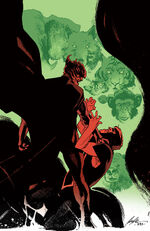 Buddy Baker, the Animal Man, later began taking more animal rights-themed cases, as a way of coping with the death of his son Clifford. During one of these cases, which involved several missing pets, zoo animals, and strays, he discovered a cult obsessed with becoming more animal then man, replacing several of their own body parts with that of stolen animals. Upon further investigation, it was revealed that these "Splinterfolk" were working under Brother Blood's command and drained Buddy of his blood.

Once obtaining blood from Beast Boy and Animal Man, Blood opened a portal into The Red, and revealed he was in a traitorous partnership with one of a totem of the Red. He was eventually stopped and banished from the Red with joint efforts by Maxine and Buddy Baker.[2]

Even later, Brother Blood resurfaced and was defeated by the Teen Titans. He was imprisoned underneath Mercy Hall by Robin.[3] He took part in the prison breakout but was apprehended and imprisoned once more.[4]

Once Robin's illegal prison was discovered, Damian decided to brainwash his prisoners, including Blood, into becoming citizens using the magic of Djinn.[5] This magic would wear off however once Djinn was imprisoned within her ring by fellow member Roundhouse.[6]

Because of this, Brother Blood sought revenge on the Titans for his cruel treatment. But before he could enact his plot, he was supposedly killed by Robin, who had taken on a new, extreme form of fighting crime.[7]

Retrieved from "https://dc.fandom.com/wiki/Brother_Blood_(Prime_Earth)?oldid=2808330"
Community content is available under CC-BY-SA unless otherwise noted.