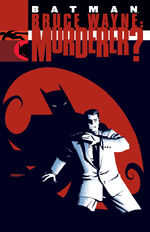 Bruce Wayne: Murderer? and Bruce Wayne: Fugitive are two storylines published across Batman titles in 2002. Bruce Wayne is a suspect in the murder of Vesper Fairchild.

In Batman: The 10-Cent Adventure #1, Bruce Wayne and his then bodyguard Sasha Bordeaux find a dead Vesper Fairchild in Wayne Manor, right before the GCPD burst in on an anonymous tip. The two are incarcerated in Blackgate Penitentiary, leaving the rest of the Batman Family to investigate the crime. Oracle finds that even the identity of Batman is an insufficient alibi for Bruce, and the evidence suggests that he finally snapped and killed Vesper to prevent her from revealing his identity to the world, then did a near perfect job of getting rid of the evidence. Finally fed up, Bruce escapes from Blackgate and announces his intention to end the identity of Bruce Wayne, and exist only as Batman.

Some of the Batman Family continues to doubt Bruce's innocence in the murder of Vesper Fairchild, as it seems he really has gone over the edge this time. They undergo an extensive investigation while Bruce struggles with the complications of his identity fighting crime in the streets. Eventually, they discover that Vesper's true murderer was the ever-devious David Cain. Cain was hired by then President Lex Luthor to destroy Bruce Wayne in both wealth and character, because Luthor was angry at Wayne embarrassing him during the "No Man's Land" fiasco. Simultaneously, Batman tangles with Checkmate and learns of the presidential plot from the other end. Also, they find Lex Luthor is still unaware of Bruce's alter ego, but when he hired Cain, Cain saw the chance to get Batman also as an added perk. After re-learning the value of his humanity with Catwoman's help, Bruce and his allies confront David Cain, attack and incarcerate him, then clear Bruce's name. 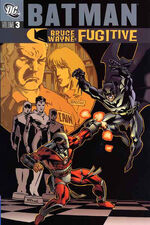 Even after Bruce is declared innocent, Sasha Bordeaux is forced to remain prisoner in Blackgate. Although Bruce makes continuous efforts to free her, he eventually finds that she has died in prison, although he suspects the declaration. Sure enough, upon further investigation, Batman finds that Sasha Bordeaux has been adopted as an operative of Checkmate. Although he does have the opportunity to meet with her one final time, she is no longer in love with him, and largely snubs him. As David Cain awaits trial, President Luthor becomes worried that his testimony will reflect extremely poorly on the White House. He hires Floyd Lawton (Deadshot) to assassinate Cain while he's being transported, and as Cain is still in an immensely depressed state from his last encounter with his daughter Cassandra (Batgirl), Batman knows that Cain is very likely to let it happen. While the Batman Family is fighting Deadshot, Cassandra manages to inspire new life in her father, and instead of passively watching, he shoots Deadshot into a temporary coma. In the end, Batman is back in business.