"Bruce Wayne The Road Home: Batgirl": In the past, Stephanie Brown adopted the identity of the vigilante Spoiler, but her actions would always be contested by Gotham City's prime vigilante, Batman. However, right now, Stephanie is t

There's hope for you yet, Miss Brown.

In the past, Stephanie Brown adopted the identity of the vigilante Spoiler, but her actions would always be contested by Gotham City's prime vigilante, Batman. However, right now, Stephanie is the newest Batgirl and she has arrived just in time to stop a mysterious criminal from stealing some special equipment from WayneTech. Batgirl jumps into combat against the mystery criminal, but she is forced to dodge an incoming laser attack from him. Batgirl tried to use some of her Batarangs against him, but he uses a blast of green energy to counter her attack and knock her to the gound. Oracle, who is always watching over Batgirl, asks her what is her current situation and Stephanie starts thinking that she is fighting the overpowered android Amazo, but Oracle tells her that it is unlikely. Soon, the mysterious criminals turns invisible and Batgirl destroys a fire extinguisher nearby to use the foam to locate the criminal, who in turn escapes from the place at supersonic speed. As Batgirl starts following the trail, the criminal is revealed to be in the same place as he never actually moved. When he takes off his mask, it is revealed that the criminal is in fact Bruce Wayne.

The next day, Barbara and Stephanie discuss the events of the previous night and Barbara informs Stephanie that Batman and Robin also encountered the same criminal recently and that she is going to call the Birds of Prey to assist them against this new threat. Stephanie is excited at the idea of working together with the Birds, but Barbara wants her to stay out of the case and Stephanie promises to do it.

However, Stephanie never said she wouldn't investigate and with help from Proxy, they start following the trail left by the mysterious criminal. Proxy guides Stephanie across the streets into a derelict building, where she finds a map of Gotham in which Crime Alley is highlighted. After a quick investigation, Proxy learns that the equipment stolen from WayneTech is an advanced gun that could phase through walls, allowing the bullet to travel across buildings. At that moment, a group of thugs arrived at the place and Stephanie get ready to fight. While she fought them, Bruce was watching the whole scene with his invisibility suit and after watching Stephanie's progress, he is satisfied. After defeating the thugs, Stephanie leaves the place and runs towards Crime Alley, where she knows the criminal would use the gun. 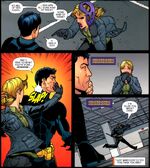 Stephanie slaps Bruce
Stephanie arrives just in time for the reclamation ceremony of Park Row, in which many important people are participating including the mayor of Gotham, Commissioner Gordon, Dick Grayson, Tim Drake and Damian Wayne among others. Stephanie tries to approach them, but the place is heavily guarded and instead, she relies upon Proxy to find any source of a camera or broadcast that could be transmitting the whole event and after a few minutes, she locates the source of a single interner stream. Stephanie goes to the place, which was blocks away and confronts the mysterious criminal once again. However, the man has no intention of moving or attacking her and instead he remarks how good she was at her job. Stephanie doesn't believe she was as good and all she wants to know is who is behind the mask. Bruce takes off his mask and before he could explain himself, Stephanie slaps him in the face. After realizing what she just did, Stephanie runs away but tells Bruce that she is glad to have him back.

At that moment, Vicki Vale approaches Barbara Gordon to question her about her current standings with Dick Grayson, Bruce Wayne and the Bat-family, but Barbara replies in a manner that leaves Vicki without any solid evidence to confirm her theories. As Vicki walks away, Barbara hacks into Vale's system to learn how much does she know about them all.

The rightful Batgirl
Some time later, Batgirl is joined by Bruce, who wants to talk to her. Stephanie starts telling him that she didn't meant to slap him, but she did because she was furious and scared. Stephanie always hoped for Bruce to return, but she feared that when that moment came, he would take away from her the mantle of Batgirl. After this confession, Stephanie decides to stop living under the shadows of Batman's expectations and she refuses to stop being Batgirl. Bruce approaches her and the only thing he asks of her is to tell him how much she wants the role.

After learning that Stephanie cares much about being Batgirl, Bruce allows her to continue. Moments later, Bruce meets with Alfred on Crime Alley and they discuss the current situation. Alfred supports Stephanie and he wants to know when is Bruce going to reveal himself to Barbara and whether or not he is going to start looking for the previous Batgirl, Cassandra. Bruce tells Alfred that he will go to Oracle in time, but first he needs to see Selina Kyle. Bruce also informs him that he won't look for Cassandra because he knows exactly where she is and it is then revealed that Bruce had asked of her to give away the role of Batgirl to Stephanie.

Even before his apparent death, Bruce wanted to give Stephanie a real chance to prove herself and she has lived up and beyond his expectations.

Retrieved from "https://dc.fandom.com/wiki/Bruce_Wayne:_The_Road_Home:_Batgirl_Vol_1_1?oldid=2187233"
Community content is available under CC-BY-SA unless otherwise noted.