"Outside Looking In": Batman and Robin find themselves fighting against a new incarnation of the old Hangmen while a mysterious man keeps a close eye on their activities. Batman and R

Truth to tell, I'm not sure anyone has missed me at all...

Appearing in "Outside Looking In"

Synopsis for "Outside Looking In"

Batman and Robin find themselves fighting against a new incarnation of the old Hangmen while a mysterious man keeps a close eye on their activities. Batman and Robin manage to capture almost every criminal of the team, except for Killshot, who manages to escape just before the Gotham City Police Department arrive at the crime scene to apprehend the captured criminals.

The mysterious man keeps watching Batman and Robin's activities, but he is not the only one doing so. Vicki Vale is also witnessing the scene and taking pictures of the whole event, with the intention of discovering the true identity of the vigilantes. Vicki takes a small traced that was placed on her camera by Dick Grayson and taking it close to her mouth, she speaks to the device, adressing the message to Bruce Wayne, and warning him that she would reveal the truth about Batman if he didn't meet her until the next day. Her message was received by none other than Alfred, who was doing some chores in the Batcave.

Moments later, Batman and Robin have reached a warehouse following a tracer Batman placed on Killshot. to learn who was behind the killing attempt against the mayor. They drop inside the place and crash the meeting of criminals taking place at the moment. Batman and Robin start taking the criminals down, one by one until they notice the presence of an intruder in the place. They try to fight the mysterious man, but he evades them with extremely good accuracy and locates a weapon which he destroys before leaving the place. Batman and Robin couldn't do much but wonder who was the mysterious man and why did he destroyed the weapon. In the meantime, Killshot has managed to escape yet again.

At that moment, Viki Vale meets with Bruce Wayne in one of Gotham's most expensive restaurants and she is determined to get an answer from him. However, Bruce's arrogant and spoiled attitude prevents her from getting an straight answer and instead, Bruce wins her morale by kissing her by surprise. After dinner, Bruce leaves the table and tells Vicki that they could probably meet again sometime in Wayne Manor. As Bruce leaves, Vicki somehow knows that something is very wrong and when Bruce reaches the limousine where Alfred was waiting for him, it is revealed that Bruce is in fact Thomas Elliot, impersonating Bruce and taken to the meeting by Alfred, who is now ready to take Elliot back to the penthouse prison.

Batman and Robin follow the tracer on Killshot again and find him at the nearest heliport, where they finally capture him and let him ready for the police to apprehend. In the meantime, the mysterious man keeps watching their activities and firmly believes that the new dynamic duo is doing a jood job in the city.

Just hours later, at Vicki's apartment, she finally realizes that the man she just met was not Bruce Wayne and following her investigations, she deduces that Bruce is somehow missing and Dick has taken the mantle of the Bat, leaving only one question to be answered, "where is the real Bruce Wayne?" 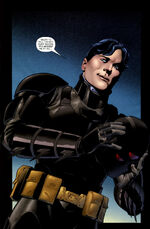 Bruce Wayne is Back

As dawn breaks in Gotham, the mysterious man arrives to a secret base of operations, where he meets with Red Robin and, taking off his mask, he reveals himself as Bruce Wayne. Bruce has been observing Dick and Damian's activities to measure their qualification for their new roles. Bruce is actually satisfied, but Red Robin informs him that the Hangmen's killing attemp had been replicated on several other parts of the world, making this a whole conspiracy or murder. Red Robin knows that they must lure the assassins to Gotham in order to capture them and Bruce tells him that he is going to be the perfect bait.

While writing on his "White Casebook", Bruce explains the reasons that make Dick and Damian good for the roles of Batman and Robin, while also pondering why they aren't good enough. However, he admits that they are going to be part of a larger plan of his, but before that, he has to visit some of his other allies.

Retrieved from "https://dc.fandom.com/wiki/Bruce_Wayne:_The_Road_Home:_Batman_and_Robin_Vol_1_1?oldid=2214960"
Community content is available under CC-BY-SA unless otherwise noted.