"Lifting the Vale": Not long ago, Selina Kyle's heart was removed from her body and the person who cared the most for her during those moments was Bruce Wayne, who has finally returned to the present timeline and is ready to get in contact

Next time, I'll steal your heart!

Synopsis for "Lifting the Vale"

Not long ago, Selina Kyle's heart was removed from her body and the person who cared the most for her during those moments was Bruce Wayne, who has finally returned to the present timeline and is ready to get in contact with his beloved.

Selina attends a fancy meeting of criminals such as Penguin at the Club V along with Poison Ivy. However, Selina is not planning on stealing anything in the place or cause any trouble, but instead, she has been tasked with the mission of following reporter Vicki Vale as she is hot on the trail of discovering the Batman Family secret identities.

An auction begins at the Club V and several objects from unknown origins are placed to sell. One of the items is a cat statue with incrusted diamonds that Selina remembers because she tried to steal that same statue years ago and was stopped by Batman. The statue was being showcased at the Gotham Historical Society and Catwoman tried to stole it the same night when Bruce Wayne and Commissioner Gordon were on the ceremony. Catwoman tried to escape with the statue on one of Gotham's famous blimps, but Batman followed her and tried to apprehend her, causing her to drop the statue to the river below. In one last attempt, Catwoman managed to escape from Batman, but they would meet again in the future.

The auction continues and at that moment, the place is crashed by Harley Quinn, who wants to retrieve her pet hyenas Bud and Lou from the criminals who want to sell them. Harley frees her pets and at the same time she frees other exotic animals and the place becomes a turmoil. The security thugs try to stop Harley and Ivy joins the fight to help her. Selina is conflicted because she wants to take the statue with her, but her sense of duty makes her stop and she tries to find Vicki among the crowd, to no avail.

Moments later, Vicki arrives at her apartment, disappointed that the informant that was supposed to give her information about Batman and the Waynes didn't appear at the meeting. While she contemplates the Bat-Signal in the dark sky, her phone rings and the informant apologizes for missing their appointment and sets up a new meeting in 20 minutes. Vicki leaves her apartment and Catwoman finds the perfect time to break inside and collect the information that she was asked to retrieve. Catwoman finds the wall of evidence that Vicki had been gathering for months and she starts taking pictures. However, Catwoman also notices that Vicki is not only trying to connect the Bat-Family with the Waynes, but she is also determined to reveal the true identities of several criminals of the Gotham underground, including Selina herself. Catwoman takes one last picture of evidence before leaving the place just seconds before Vicki returned from her second failed attempt to get information. Vicki notices that her window is wide open, but everything in her apartment is in the right place. 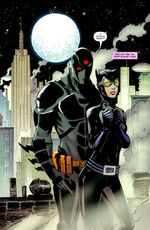 Later, Catwoman meets on a rooftop with the person who asked her to retrieve information and the same person who was supposed to be Vale's informant, the Insider. He asks Catwoman for an honest opinion on the Vale investigation and Catwoman reckons that Vale has done a great detective work and that she is only missing some evidence to connect everything. However, Catwoman also realizes that Vale is just in need of closure about her past relationship with Bruce and that maybe, if someone talks to her, she would stop her crusade, which would only end up badly for her. At the mention of Vale's past relation, Insider mentions something about a stolen heart and Catwoman remembers that there is only one person who can know what those words mean to her. She turns around and finally realizes that Insider is in fact Bruce Wayne. They share a moment together, but before Selina realizes, Bruce leaves.

Bruce came back to Gotham to test Catwoman and see if she was doing fine, despite her new partners and he found that Selina is aways adapting and now, she is probably stronger that she was ever before. At that exact moment, Catwoman has retrieved the cat statue she wanted with help from Ivy and Harley and they destroyed one of Club V's airplanes.

Appearing in "Lifting the Vale"

Retrieved from "https://dc.fandom.com/wiki/Bruce_Wayne:_The_Road_Home:_Catwoman_Vol_1_1?oldid=2187246"
Community content is available under CC-BY-SA unless otherwise noted.