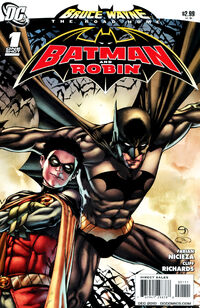 Bruce Wayne: The Road Home is a series of one-shots released in 2010 chronicling the return of Batman and his interaction with his fellow members of the Batman Family. Characters with ongoing monthly series had the month of October, 2010's issue replaced with an issue from this series.

Back to Comics Contents : Comics B : Bruce Wayne: The Road Home Vol 1

Retrieved from "https://dc.fandom.com/wiki/Bruce_Wayne:_The_Road_Home_Vol_1?oldid=2664766"
Community content is available under CC-BY-SA unless otherwise noted.