Hear that? It's the sound of the Robin King, and a new spring is coming.

The Robin King is a homicidal young Bruce Wayne from the Dark Multiverse serving the Batman Who Laughs. 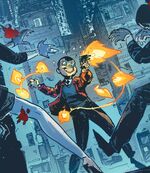 Bruce Wayne was born into the wealthy Wayne Family of Gotham City. He had been a violent child ever since he was a baby, which the butler Alfred Pennyworth knew, but ignored out of attachment and the belief that he'll grow up to have a calmer personality. The child would make an excuse whenever he was caught and Alfred helped hide his violent attacks even from his parents, but one day decided he had enough. Unfortunately for him, that very same day Bruce killed his parents when they took him to the movie theater. They were stopped by a mugger as they were returning home, but he stabbed him before using his gun to kill his shocked parents. When the police arrived, he pretended that the mugger had shot them.[1]

At the funeral, he felt panicked and confused, but was reluctant in reaching out to Alfred. Soon however, he heard a robin bird singing and thought that its noises which sounded like "cheer", was exactly how he felt since killing his parents. Being inspired by the bird which took over nests of other birds, he decided to become a robin himself who will conquer others and spread his message of overthrowing the old order among the youth. Bruce secretly started accumulating weapons to kill various superheroes of his world by getting the adults to give him money, and built a utility belt loaded with them.[2]

Soon the police officer James Gordon, who had been nearby when the Waynes were murdered, arrived at the Wayne Manor and gave evidence to Alfred, which showed that the one really responsible was Bruce himself. He was shot through the jugular vein however by Bruce, who turned his crossbow on Alfred. Alfred however subdued him with the tranquilizer gun and took him outside, before recorded the truth about him on Thomas Wayne's voice recorder. Bruce however burst in from the window dressed in a strange garb with a R on it and a crown of thorns, proceeding to disarm and bash his head in with a bust. As Alfred died, he rung a handbell and declared himself to be the "Robin King".[1]

At one point, he covered Barry Allen's mother in a poisonous substance that could nullify his Speed Force, while also melting his muscles, before stuffing her inside Barry's Flash Ring.[3] He also killed Anton Arcane and Abigail Arcane, obtaining The Rot from their bodies. Another elemental he killed was Swamp Thing. While many of the heroes believed he was just a traumatized child dressing up as a bat, Harley Quinn recognized him for who he was and tried to kill him at the Wayne Manor. Bruce however gunned her down first.[4] He also modified the Anti-Life Equation to be able to turn people into the life-devouring Anti-Living.[2]

His killings however were soon revealed to the world, leading to a manhunt against him. Adam Strange, Balloon Buster, Enemy Ace, Firestorm, Hawkgirl and Hawkman came after him, but were all killed. The Batman Who Laughs soon showed up and revealed to him that his world wasn't real, but would soon disintegrate. He promised to show a world where his actions could have meaning and took Bruce to Earth -22, where he told him that his attempts at inspiring others were futile, as they never listened and must be ruled over. Laughs then showed him the kids he was transforming into the Groblins to serve him, before forcibly making him his Groblin. Bruce however was able to swallow a pill that allowed him to retain his free will deep inside his mind.[2]

The Dark Knights took Bruce along when they invaded Earth 0 under a pact with Perpetua, inducting him as part of the Robins under the Batman Who Laughs. When Laughs killed some of the Dark Knights after gaining the powers of the Final Bruce Wayne, he recognized that the child unlike them was inherently vicious and asked him about his background. After hearing it, he asked him to be his partner as the "Robin King", since he was still weak. The Batman Who Laughs then changed his form into that of the "Darkest Knight" in front of him.[5]

As promised, the young Robin King was given his crown and dressed up in his old suit again. He later teleported to the Valhalla Cemetery in order to watch the Batman Who Laughs kill Wally West and the other heroes. He told them how he had made plans to kill every hero, including that for Barry Allen, which were kept in his utility belt. Doctor Fate upon learning how he had planned to kill Barry of his own world, was shocked and told everyone to not listen to him, before being told by Bruce that the Darkest Knight was coming for them and he just came to enjoy the coming carnage.[3]

He assaulted Harley Quinn, Jarro, Jonah Hex and Swamp Thing who had been left to stay at the portal to the Dark Multiverse in the Castle Bat. As he talked about how he killed Harley of his universe, Jonah shot at him, before Bruce shot back with a Debrider bullet (which started eating at his undead tissue) and used the Rot to attack Swamp Thing, forcing the heroes to flee.[4]

Bruce soon smashed through the wall of plants Swamp Thing had created as a barrier, bringing the dying Hex along with him and stabbing him before a pleading Harley with a knife, which sent any sinner to Masak Mavdil, where demons took the shape of those they wronged and tortured them constantly. He then showed the hammer her world's Harley had tried to kill him with and told her that there was no eviler version of Harley in the Dark Multiverse, which meant she was already a great evil in her own world. As he talked, Swamp Thing collapsed part of the cave roof on him and fled further inside Castle Bat with others, though knowing he survived.[6]

After the Darkest Knight gained the Crisis Energy by tricking Batman, Superman and Wonder Woman of Earth 0, he called forth the Robin King. The heroes easily fell before his weapons, but Animal Man, Ted Kord and Red Tornado soon intervened. Robin unleashed Animal Man's Anti-Living family from his universe to kill him, while turning Red Tornado into a human as he slowly died and having Ted eaten alive by a giant beetle. As he fought Batman, Wonder Woman and Superman again, the Dark Knight stated he had enough fun and took him back to Earth -22, where he revealed to him that he had turned him into a Groblin to set an example that freedom will always fail, but he had inspired others by retaining his free will.[2]

Retrieved from "https://dc.fandom.com/wiki/Bruce_Wayne_(Dark_Multiverse:_King_of_Pain)?oldid=2819858"
Community content is available under CC-BY-SA unless otherwise noted.