Fine. You may have severed my brainstem, but I am Batmobeast. In a world of genius machines, I rose to dominance. You cannot best me.

The Batmobeast was an evil Batman from the Dark Multiverse, whose consciousness' last copy was left in a monster truck. 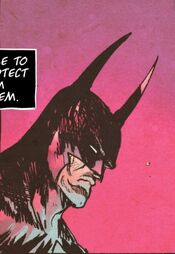 The world of Batmobeast went into chaos as it started running out of gas and Batman decided to upload his consciousness into everything that had digital systems. Soon he was everywhere and ruled the world as part of his surveillance state. The people around the globe however rose up and decided to fight back, destroying everything that contained his consciousness before killing his actual body. The monster truck was the only thing that still retained Batman's consciousness, calling itself "Batmobeast".[1] The Batman Who Laughs later recruited him into the Dark Knights, in order to invade Earth 0 under a pact with Perpetua, and they won the war in a week.[2]

Wonder Woman, Swamp Thing and Wally West later abducted and hacked into him so they could use him to get to the Valhalla Cemetery safely through the Hellscape (the former United States now turned into a literal Hell on Earth). Batmobeast demanded to know where he was and upon not getting an answer, boasted he was the smartest machine back on his world. Swamp Thing asked him a joke question and upon answering it, he mocked him and told him to try harder next time. An annoyed Swamp Thing then proceeded to destroy his digital systems, thus terminating him.[3]

Retrieved from "https://dc.fandom.com/wiki/Bruce_Wayne_(Dark_Multiverse:_Road_Warrior)?oldid=2806291"
Community content is available under CC-BY-SA unless otherwise noted.