I love you, son. I always have. But in order for this to work, I have to sacrifice something I love. And I think we both know, there's nothing I love more than Gotham. And so every part of what I love, every street light on every corner, every brick in every building, every crack in every sidewalk, is me now.

Castle Bat was an evil Batman from the Dark Multiverse in the form of sentient city created after Bruce Wayne merged his soul with Gotham and later became the headquarters of the Batman Who Laughs. 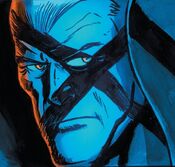 Bruce Wayne was a businessman and owner of the Wayne Enterprises. He secretly used to be the vigilante Batman and over the years acquired many allies. He also sired a son named Damian, who took over the mantle after he retired due to old age. Gotham City however eventually went into chaos with criminals ruling the streets, and Bruce decided to perform an ancient sacrificial ritual he learnt was performed by a cult in the 17th Century for a Native American bat god, with a person receiving greater reward for sacrificing someone they deeply held dear. He killed Damian after luring him, by indicating he should perform the ritual on his father. The ritual in turn merged his soul with Gotham and gave him control over every part of it, which he used to hunt down every criminal.[1]

The Batman Who Laughs convinced him to join his Dark Knights, in order to invade Earth 0 under a pact with Perpetua. The sentient Gotham started replacing the Gotham of Earth 0 right before Nightwing and Batgirl's eyes as they were helpless to do anything. The Dark Knights conquered Earth in a week and the Batman Who Laughs split off Gotham from the rest of the United States and expanded into its own continent. The sentient Gotham City meanwhile was chosen by the Batman Who Laughs as his headquarters from where he would rule Earth and was named as "Castle Bat".[2]

When Batman, Superman, and Wonder Woman exited the Dark Multiverse, The Batman who Laughs, now The Darkest Knight, commands Castle Bat to attack them. Castle Bat then turned into a gigantic replica of Batman to do battle. However, Lex Luthor appeared and used a modified Braniac algorithm to transfer Bruce's soul from Gotham, and into a miniature Gotham replica in a glass ball. This would have kept him trapped for centuries, but Harley Quinn stepped on the ball, killing him.[3]

Retrieved from "https://dc.fandom.com/wiki/Bruce_Wayne_(Dark_Multiverse:_This_Man._This_City.)?oldid=2829044"
Community content is available under CC-BY-SA unless otherwise noted.