Bruce Wayne was a socialite billionaire of Gotham City and secretly the vigilante known as the Batman.

Bruce's parents were murdered during his childhood by criminals, after which he was cared for by Sister Leslie. He traveled the world to train himself, in order to be able to take vengeance on the criminals, before finally returning to Gotham City and becoming the vigilante known as the "Batman". He also utilized his family fortune to fund Leslie's orphanages. One night while patroling, he found a bunch of orphan kids calling themselves Outsiders intimidating an elderly couple at the behest of the thug Big Bill Dust. Going after Bill since he was forcing them do it, he subdued him before telling the kids to go home, breaking Bill's leg as an assurance he won't bother them again.

Batman suddenly heard a woman's scream while finishing dealing with Bill, but arrived too late in time to save the victim. He visited the opening of Gotham World Fair, whose construction he himself had funded in order to make the city more hopeful, before privately discussing the murders with Leslie and police commissioner James Gordon. Leslie revealed to him that the latest victim was Pamela Isley, who once lived in her orphanage, which saddened him since he was closely attached to orphans. Patroling during the night he came across the actress Selina Kyle, who had caught his eye at the world fair earlier, and saw her being tailed by Jack the Ripper.

Bruce interrupted Jack before he could kill Selina and the two men engaged in a brutal duel, which he ultimately lost. He however used a lever to drop Jack through the floor, but this angered Selina as he had escaped. Batman later met Gordon at his home and pleaded to him to give anything he had on Jack, since lives of all women were in danger. Gordon in turn gave him the letter the serial killer had written to the Gotham Gazette, but Bruce was unable to discover anything of value. Attending a musical performance at the Monarch Theater with his old schoolmate Harvey Dent, he became enchanted by Selina who also performing. Selina became attracted to him too as the three took a walk through Gotham, before he helped her sneak inside the Dionysus Club. 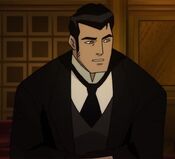 At the the Dionysus Club, Bruce figured out Selina's background with his elementary detective skills and her tragic past had led her to stand up for the marginalized sections of society. Selina stated she knew he was a man who liked mystery from Leslie, who looked after and protected such people. Bruce instantly remembered how Jack had warned in his letter to kill all those who protected prostitutes and rushed to her church. He however arrived too late to save her and swore vengeance against Jack. At her funeral, Hugo Strange met him and told him to send the Batman to meet him at Arkham Asylum, as he knew Jack's real identity. He insisted that he didn't know Batman, but Hugo soon left.

As Bruce himself was leaving, a homeless woman named Marlene Mahoney accosted him and revealed she had seen him near Sister Leslie's murder scene, threatening to publicly reveal it if he didn't pay her. When he later went to Arkham, he found Hugo missing from his office and overheard his screams. Bruce arrived too late as Jack threw him into a pit with the violent mental patients, resulting in the doctor's death. He pursued the killer across the city and atop a police blimp, engaging in a brutal fight. Jack succeeded in getting the upper hand almost killed him, but he was saved as the police fired at the blimp, which caused it to start exploding and crash.

Jack escaped and Bruce too was forced to flee in order to avoid getting killed by the police. Selina soon came by unexpectedly and rescued him. As she saw his wound, she tried to dress it up before discovering that he was the Batman. Knowing the police would be looking for him, she convinced him to pretend having sex in her carriage in order to avoid suspicion. The two later went to her hotel where they actually had a sexual encounter and grew closer while talking about each other's tragic pasts. The police, led by Chief Bullock, barged into their hotel and arrested him, with Dent having told them that he'll likely be with her. Dent later convinced a judge that Bruce was a possible threat to the city and could use his money to gain freedom, having him sent to the Blackgate Penitentiary.

Selina later came by and tried to convince him to tell Gordon he was Batman, since it was known that Batman didn't murder Pamela and the city needed him in order to stop Jack. Bruce rejected this, stating he needed to keep his identity a secret in order to remain effective as a vigilante, which caused Selina to decide to reveal it herself to Gordon. Remembering the lesson of one of his masters, he deduced that one of his own friends was implicating him/ He later hatched a plot to escape by starting a prison riot and bribed a prison guard into delivering a letter to his trustworthy butler Alfred Pennyworth. After escaping, Bruce came across the Outsiders again, who brought him a crate containing the Batcycle sent by Alfred.

Going to Gordon's house, he came across a secret room where he discovered multiple organs preserved in jars and newspaper clipping of the Ripper's murder, realizing he was Jack. Gordon's wife Barbara tried killing him, but her attempt was quickly foiled. As she revealed her burnt face and how Gordon believed women were sinful by nature, he intimidated her into telling where he was. Bruce arrived in time at the world fair to stop him from killing Selina and the two engaged in an all-out brawl. The Ferris wheel caught fire during their fight and the maniac soon revealed the reason for why he had committed the killings. He saved him from falling, but the maniac quickly cuffed him with himself before rescuing the battle. Bruce soon overpowered him and cuffed him to a rail.

As the Ferris wheel started falling, Bruce tried saving Gordon, but he preferred to burn himself alive. After he safely reached the ground, Selina rescued him from being crushed and Alfred came in a carriage with the Outsiders to take the away. Bruce questioned Alfred if he had taken in the orphan kids, to which he replied negatively and stated they now belonged to him instead. As they left, Bruce and Selina watched sadly as the world fair was destroyed in explosions. The orphan Dickie however stated it was pretentious anyway and they'll build something better.

Retrieved from "https://dc.fandom.com/wiki/Bruce_Wayne_(Gotham_by_Gaslight_Movie)?oldid=2806808"
Community content is available under CC-BY-SA unless otherwise noted.