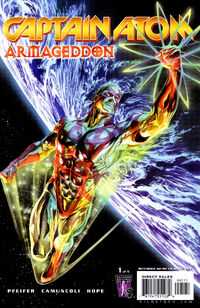 Captain Atom: Armageddon is a 2005/2006 9-issued limited series under DC's WildStorm imprint. The story focus on Captain Atom being displaced in the Wildstorm Universe after his self-sacrifice in destroying a kryptonite meteor from destroying Earth at the conclusion of the "Public Enemies" arc in Superman/Batman, and his involvement in the WorldStorm event which saw a series of reboots of many Wildstorm titles.

Retrieved from "https://dc.fandom.com/wiki/Captain_Atom:_Armageddon_Vol_1?oldid=2586919"
Community content is available under CC-BY-SA unless otherwise noted.