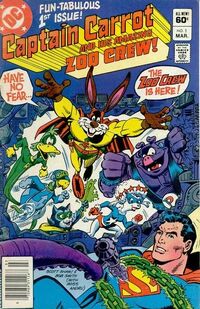 Captain Carrot and His Amazing Zoo Crew originally appeared as a preview back-up feature in the pages of New Teen Titans (Volume 1) #16. In March of 1982 the Zoo Crew returned in their own ongoing comic book series, which lasted until November of 1983 spanning a total of twenty issues. Captain Carrot and his friends appeared last in the pages of Teen Titans (Volume 3).

Retrieved from "https://dc.fandom.com/wiki/Captain_Carrot_and_His_Amazing_Zoo_Crew_Vol_1?oldid=1698361"
Community content is available under CC-BY-SA unless otherwise noted.