I'm not a superhero, Bunker. Right this moment, I'm just a very angry girl looking for someone to hit.

Cassandra Sandsmark is Wonder Girl, a member of the Teen Titans and Young Justice. She is the daughter of Lennox, making her a granddaughter of Zeus, the mightiest of the Gods of Olympus, and the niece of Wonder Woman.

Cassandra Sandsmark was born to archaeologist Helena Sandsmark and the demigod adventurer Lennox.[1] Her father left when she was four, after which Helena and Cassie traveled the world from dig site to dig site. Helena became Archaeologist of the Year for five years in a row. Cassie learned much about archaeology and foreign languages, but this globetrotter lifestyle left no room for school or friends. In order to cope with her frustrations and lack of a normal life, she turned to crime. Wherever she went with her mom, she would steal art from museums and collectors.[3]

At age 16, she met the art thief Diesel when he saved her from local police. Not having had any friends, she immediately fell for the impressive figure. The two started "dating" - Diesel would meet up with Cassie whenever she went on an expedition with her mother, and they would sneak off together, stealing art, meeting fences and business partners, and living in luxury hotels. Diesel called her his biggest treasure, and was uneasy that she still spent time on the dig sites.[3] 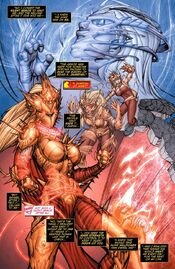 The Silent Armor binds itself to Cassie.

Several months later, at a dig site near Angkor Wat in Cambodia, everything changed. Diesel had gone ahead and explored a dangerous section of a temple. When Cassie found him, he was being attacked by a liquid metal. Because she couldn't get it off, she searched for tools in the temple. She found two ancient bracelets, which turned out to be related to the metal. They transformed her clothes into armor, and gave her new insights into what the metal was. It was an alien parasite, and she knew Diesel wasn't strong enough to control it. She conned the metal to release him and choose her instead, but instantly regretted it, as she couldn't master it with ease.[3]

Diesel was outraged that Cassie stole his biggest find, his ticket to greatness. Before he could attack her, the temple collapsed. Cassie escaped, but found no trace of Diesel. The disaster severely damaged Helena's reputation, and with it, her relationship with her daughter.[3]

Cassie became a wandering thief, stealing from wherever she went. However, she kept most of it rather than fencing it off. The media had come to dub her "Wonder Girl", but she hated that name.[4] She had no relation to Wonder Woman (to her knowledge), and was so intimidated by the woman she had never met that she was reluctant to use a name similar to hers.[5]

Main article: Teen Titans: It's Our Right to Fight

Cassie eventually moved to Hollywood, where she bought a little house and continued her crime spree. Her exploits had caught the attention of N.O.W.H.E.R.E., who were gathering metahumans for research. A few days before Halloween,[6] she was ambushed on the coastal highway by a fake policeman. Red Robin, who had been tracking N.O.W.H.E.R.E., intervened. When he explained why he was there, Cassie was distrusting and reluctant. Not just because this metahuman-hunting organization now attacked a non-metahuman, but also because Red Robin was aware of her criminal activities. A renewed attack forced her to activate her armor. Though she defeated the attacking helicopter, she realized her life wouldn't be the same.[4] 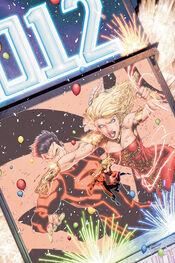 Cassie took Red Robin to her home, where he spent the night on the couch. He explained he was going to investigate other metahuman kids, but Cassie told him she was not interested in teaming up. She did decide to track his movements as he investigated Skitter, and saved him in an ambush by N.O.W.H.E.R.E. agent Thrice.[6] She started doing more research into N.O.W.H.E.R.E., and enjoyed it.[7]

Her research had made her a renewed target; N.O.W.H.E.R.E. ordered its prime agent Superboy to bring her in.[8] On New Year's Eve, she was attacked in New York City. She held her own, and with the help of Red Robin and his new allies (Skitter, Bunker, Kid Flash and Solstice) they escaped. Superboy, realizing he'd been used, betrayed N.O.W.H.E.R.E.[9]

Red Robin wanted to rescue Superboy from N.O.W.H.E.R.E., but the others didn't agree, after their fight earlier. Wonder Girl was the first to budge. At the secret facility where Superboy was held, Cassie defeated Ravager and Templar. Once they freed Superboy and tried to escape, they were captured by the villain Harvest.[10]

Main article: The Culling: Rise of the Ravagers

Harvest had been gathering young metahumans to have them fight in an event called the Culling to thin the ranks of your power users. This time, the Titans were up. In the Crucible, they quickly teamed up with the Legion of Super-Heroes and the Ravagers.[11] Red Robin devised a plan for them; the Legion would go after the central power core while the Titans held off Harvest's mobs. Wonder Girl worked together with Superboy, though she still had issues trusting him. When the Legion succeeded, Wonder Girl proposed escaping. Harvest would live, but his resources and base were destroyed, so he was out of the picture for now.[12]

Cassie and Kon escaped together and landed on an island infested with dinosaurs. The two didn't get off to a good start, as their alone-time immediately resulted in bickering. As time progressed, they became more comfortable with each other. Cassie still didn't open up about her secrets, and considered all friendliness over after Superboy tried to kiss her.[13] They eventually regrouped with the others, and Danny the Street brought them home.[14] 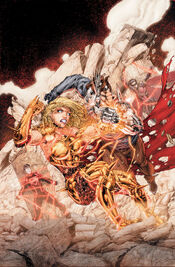 The more Cassie used her armor, the more difficulty she had controlling it. She suffered fits of rage, self control issues and occasionally blacked out. Her repeated use of the armor also allowed Diesel, who had survived the temple collapse, to track her down.[15] One night, it went completely wrong. While the team was relaxing in their Lextowers base, the armor took over. She quickly defeated Bunker, Solstice and Kid Flash. Superboy and Red Robin lured her away from the city, and Superboy removed Cassie's armor with his telekinesis. Before she could recover, Diesel showed up, and absorbed the armor debris.[16]

Determined to get the armor back, Cassie explained her history to her friends and lead them to Cambodia. Though Diesel showed he could control the armor, Cassie doubted that he would use the power for benevolent purposes. At the temple site, they discovered the armor was connected somehow to Trigon.[16] They were attacked again by Diesel and an group of blood warriors. With no powers, Cassie left the warriors to her friends. She explained to Diesel she did everything because she loved him, and didn't want him to suffer. He didn't accept that, so Cassie used the ace up her sleeve: she had kept the lariat hidden, and used it to ensnare Diesel. It drained the life from Diesel, and he withered away. With no host, the armor returned to Cassie.[17]

While Red Robin was away on personal business, Cassie stepped up to become leader. But on her first outing, she could do nothing but watch as H'el took Superboy.[18] So when they discovered Red Robin was kidnapped by the Joker, she lead the team to Gotham City, desperate not to lose another member. They met up with Batgirl, who told them to leave as they weren't ready for Gotham. Wonder Girl decided to help either way.[19] They teamed up with the Outlaws (Arsenal and Starfire) to distribute anti-Joker Venom vaccines to Jokerized mobs around Gotham.[20] With that arduous task complete, she decided Batgirl was right, and waited for Red Robin to return on his own.[21] 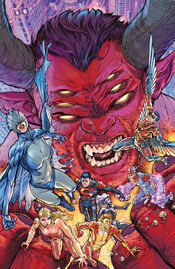 Trigon against the Titans.

The interdimensional demon Trigon had set his eye on Earth, and sensed the presence the Silent Armor. He planned to defeat the Titans completely and utterly by destroying their reputation and relationships.[1] He had Red Robin possessed, and used him to destroy the team from the inside. Red Robin showcased a slew of odd behaviors, which included seducing and sleeping with Wonder Girl.[22] This "foreplay" heralded the arrival of Trigon in Times Square, which Cassie sensed through her connection with the Silent Armor. Wonder Girl charged into battle, but was quickly dispatched. As he held her, Trigon revealed he knew a lot more about her than she did, including who her father was. The other Titans, Beast Boy, Psimon and Raven joined the fray, which by now had killed dozens of people. Raven explained Trigon's plans.[1]

Cassie and Bunker defeated Ruskoff, but the Titans were no match for Trigon himself. Eventually, Red Robin managed to wound him, which forced the demon to retreat.[23] Raven explained that Trigon tested Red Robin by lowering his inhibitions, and revealed some of the things - seducing Cassie and the very much spoken for Solstice - which he had done. Knowing the behavior came from within Red Robin and he wasn't under mind control harmed the team spirit.[24] Cassie was torn after the encounter. She questioned her feelings for Red Robin - she enjoyed the night, and was in no way resisting his seduction. However, she also liked Superboy, and confessed to him. The mystery of her father also weighed on her mind.[25]

When the Justice League was defeated by the Crime Syndicate, the Titans were looking for their own way to defeat them. It didn't go well: Johnny Quick and Atomica defeated them, and Johnny sent them into the timestream.[26] They were bounced through several timelines before being sent to the near future timeline of Jon Lane Kent. Cassie tried to find out if that timeline's League knew about her father, but a fight between Kon and Jon interrupted her search. 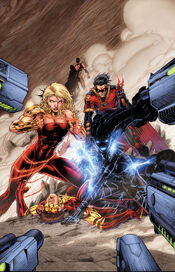 The Titans versus the Echo Chronal Authority.

In the hope that it would change the timeline, the future timeline's Gar Logan switched the wounded Kon with Jon.[27] The next stop in the timeline was Kid Flash's own timeline, where the Teen Titans discovered he was a wanted criminal. "Superboy" was recuperating in a Echo Chronal Authority hospital, with Cassie by his side. When he woke up, he attacked her in confusion, but Wonder Girl easily beat him. She didn't realize something far worse was wrong with him.[28]

Kid Flash's trial ended up in an all-out war, with the Titans taking neither side.[29] In the end, he pleaded guilty, and Solstice joined him in his imprisonment on Takron-Galtos. Superboy also left the Titans in search of his own goals. With their numbers halved, Cassie wondered what would become of them. Red Robin encouraged her, and confessed his love for her, though he had bottled them up out of professionalism. With Superboy out of the picture, she caved in to Red again.[30]

Cassie, Red Robin and Raven were returned to their own time, where they reformed the team with Bunker and Beast Boy.[30] Skitter also returned. After a final confrontation with a not-quite reformed Harvest, they decided to continue the fight.[31]

The Titans' return to New York and increased profile had two consequences for Wonder Girl. On the one hand, her mother had decided to contact her again. But also, inspired by Wonder Girl's power and determination, a gang of young women had taken up her name and appearance. Armed with crude weapons, they went out on the streets to deal violent vigilante justice to robbers and other criminals who targeted women.[32]

Who is Wonder Girl?

Retrieved from "https://dc.fandom.com/wiki/Cassandra_Sandsmark_(Prime_Earth)?oldid=2451660"
Community content is available under CC-BY-SA unless otherwise noted.