No killing? Where's the fun in that?

Catalina Flores was a former FBI agent and the sister of Blüdhaven's assistant district attorney. Dressed in the costume of her hero John Law, she became the Tarantula, in order to battle the corrupt police officers and gangland criminals of the city. She eventually encountered Blüdhaven's protector, Nightwing, who did not approve of her more extreme crime-fighting methods.

When investigating the murder of Delmore Redhorn, the corrupt Chief of Police in Blüdhaven, Nightwing discovered the murderer was Tarantula, and that she was working for his nemesis Blockbuster. She had also manipulated an encounter with Nightwing in such a manner that Barbara Gordon, his girlfriend at the time, broke up with him.

Working with Tad Ryerstad (Nite-Wing), Nightwing was able to have Tarantula arrested for the murder of Redhorn, although in the process Tad, a wanted vigilante, was also arrested. However, Tarantula was back out on the streets soon, and when the battle between Nightwing and Blockbuster heated up, Tarantula involved herself and shot Blockbuster, killing him.

Nightwing could have prevented the murder, but driven to the edge of his sanity by Blockbuster's calculated assaults on everyone whom Nightwing held dear (Blockbuster knew his secret identity and exploited this), in a moment of absolute misery, Nightwing stood aside and let Tarantula kill him.

Allowing Tarantula to kill Blockbuster caused Nightwing to have a nervous breakdown. Tarantula took advantage of his near catatonic state and made him get onto the floor. She proceeded to take his pants off and rape him. Afterwards, Nightwing was disgusted by what happened, but was told by Tarantula that there was more crime to fight.

When a diseased monster called "The Mugre" struck near Bludhaven, Tarantula followed the monster's lead to Gotham.[1] With Batman's help, they destroyed the monster by feeding it to Kafka. Afterward, Batman told her to stay out of Gotham.[2]

During the following period of time, Tarantula ran off with Nightwing and attempted to establish a relationship with him.[citation needed]

However, when the greatest gang war was unleashed in Gotham, Nightwing was asked to return and aid Batman and the rest of their allies to keep the city under control. Tarantula followed Nightwing to Gotham and took control of the Latino Unified Gang by becoming their leader.[3] Batman allowed Tarantula to stay, and she provided protection for the young people of her gang, and kept them from spreading violence in the city.[4]

After the city's power source was taken over by Penguin,[5] Batman sent Tarantula to deal with Penguin once and for all. Tarantula broke into the Iceberg Lounge, subdued the bodyguards and took down Killer Croc, Suicide King, Trickster and Deadshot. She confronted Penguin and told him to get out of Gotham.[6] 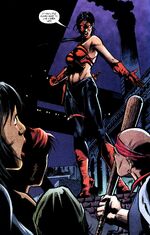 Tarantula as the leader of "Las Arañas"

When Batman's "war games" plan was set in motion, Tarantula led her gang "Las Arañas" to the massive meeting at Robinson Park. When things went wrong, she was prompted to leave the place, taking the members of her gang with her to a safe place away from the danger zone.[7] However, on their way out, they encountered several members of the GCPD and had to fight them in order to get out of the park. Tarantula was the main target of the police after Commissioner Akins gave the order to shoot every person in a costume.[8] Tarantula and her gang were cornered in an abandoned building by the GCPD and soon they were completely surrounded by the entire police department under Commissioner Akins' instructions. The GCPD wanted to destroy them and Tarantula contacted Batman, hoping for help to arrive while she faced impossible odds.[9] Batman arrived and saved Tarantula and her gang on the rooftop of the building. He led them through an escape route that took them away from the danger zone and Batman told Tarantula to take her gang and keep them safe.[10] Before she could go anywhere, Black Mask attacked the Gotham Clock Tower and Batman took Tarantula with him there, where they joined Robin, Batgirl, Onyx and Catwoman. Batman went inside to fight Black Mask while the rest stayed outside and tried to defeat Scarecrow, who was transformed into the Scarebeast. Tarantula managed to land some hits on the monster but was forced to retreat when the Tower collapsed on top of them. After the battle, Tarantula left the tower and avoided being captured by the police.[11]

After a while, Nightwing came to his senses and turned himself in for the murder of Blockbuster. He was acquitted, however, and worked to bring in Tarantula, who was sent to jail.

Catalina acquired a "Get Out of Hell Free" card forged by Neron. The card is sought after by Junior, Ragdoll's insane sister, who sends an army of supervillains after her. She eventually sacrifices herself by pulling Junior and herself in front of the combined attacks from the assembled villains, killing them both.

Retrieved from "https://dc.fandom.com/wiki/Catalina_Flores_(New_Earth)?oldid=2753750"
Community content is available under CC-BY-SA unless otherwise noted.