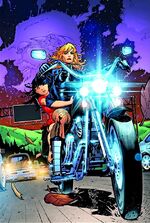 Black Canary drives a young girl through the streets on her motorcycle which she also uses for combat purposes.

Sometimes called "riding", Driving is a term used to describe the ability of some characters to control a vehicle such as a car, boat or motorcycle. An effective driver also has an intuitive understanding of the basics of vehicle handling.

Characters included in this category are those whose proficiency at driving is above average. It does not include every character who has ever driven a vehicle.

A
B
C
D
E
F
G
H
I
J
Next
Retrieved from "https://dc.fandom.com/wiki/Category:Driving?oldid=1519078"
Community content is available under CC-BY-SA unless otherwise noted.
FandomShop Newsletter GalaxyQuest